Pelham blanks Southside Gadsden to advance to 6A Final Four 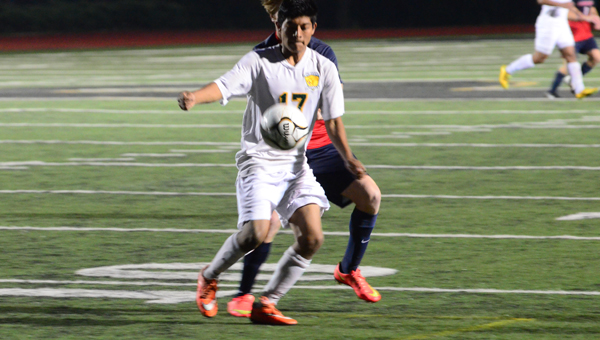 Edwuin Patricio Sostenes, shown here in Pelham’s second-round game against Homewood, and the Pelham Panthers beat Southside-Gadsden 3-0 on May 2 to advance to the 6A Final Four for the first time in school history. (Reporter Photo / Baker Ellis)

GADSDEN – Four days removed from Pelham’s dramatic, overtime victory over Homewood in the second round of the 6A playoffs, the second-ranked Panthers faced off against Southside-Gadsden for a berth in the 6A Final Four. The Panthers from Pelham shut out the Panthers from Gadsden to the tune of a 3-0 win to advance to the school’s first-ever Final Four.

Sophomore Jose Jiminez Lopez scored Pelham’s first goal to put the Panthers out front early. Late in the second half Jiminez Lopez delivered a cross from the right side of the field that found the foot of Yunior Tejada-Serrano, who punched the cross past the Southside-Gadsden keeper to give Pelham a 2-0 lead that the Panthers took into the half.

In the second half, Pelham stayed on the attack. A number of early second half chances went wide, but the Panthers controlled possession and generally controlled the pace of the game. Midway through the second half, Pelham intercepted an errant Southside-Gadsden pass around midfield and Armando Valencia found Jiminez Lopez in the middle of the field who connected for his second goal of the game. With a 3-0 lead, the Panthers held off a few late Southside-Gadsden chances to get the win.

With the win, Pelham advanced to 16-7-3 on the year. The Panthers finished the regular season ranked second in the state in class 6A, behind only Fort Payne. The Panthers will have a chance to take out the top-ranked Wildcats, as the two teams will meet in Huntsville in the Final Four. Pelham will meet Fort Payne on May 8 at 11:15 a.m. for a shot at the 6A state title.

Oak Mountain gets past Hoover in penalty kicks, advances to state semifinals

Ryan Dearman and the Oak Mountain Eagles defeated Hoover in penalty kicks on May 2 in the second round of... read more