Pelham stays undefeated in playoffs, advances to 6A semifinals 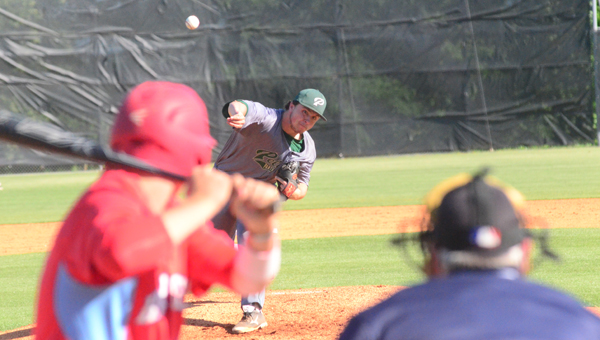 Sam Finnerty throws a pitch in the first game of the Panthers third-round matchup with Hillcrest-Tuscaloosa on May 1. Pelham won the first two games 4-1, 5-0 to advance to the 6A semifinals. (Reporter Photo / Baker Ellis)

PELHAM – The postseason has been kind to the Panthers of Pelham thus far. On May 1 Pelham (30-9) moved to 6-0 in the 6A state tournament with two wins over Hillcrest-Tuscaloosa and advanced to the semifinals in the process. Pelham won the first contest 4-1 before blanking the visiting Patriots 5-0 in the second to complete the sweep.

Sam Finnerty took the mound for the 13th time this season in game one. He threw seven innings, allowed just one run on five hits and struck out six.

All of Pelham’s runs came in the fourth inning. Finnerty doubled to left field to score Tyler White from first base to score the first run before Hunter Stovall sent his ninth home run of the year over the left field fence to score three more. The four runs were more than enough support for Finnerty, and Pelham won the first game 4-1.

Connor Radcliff, Pelham’s other ace, took the mound in the second game for the 12th time this season. Radliff pitched a complete game as well, surrendering just three hits and no runs on 95 pitches.

“Connor threw a tremendous game,” Anderson said. “This was his sixth shutout of the season. Just like game one our defense did a tremendous job.”

Logan Brashier and Stovall led the way from the plate for Pelham in the second game with three hits apiece. All of Brashier’s hits were doubles, while two of Stovall’s three were doubles as well. Cole Whitman added two hits while Finnerty and Boomer Murchison each contributed one. Murchison also had two RBI’s on the day.

With the series win, Pelham advances to the 6A semifinals, where they will take on Spanish Fort for a shot at the state title.

Thompson takes out Vestavia Hills, moves on to semifinals

Colin Lillie gets a piece of a pitch in the first game of the Warriors second-round playoff series with Vestavia... read more