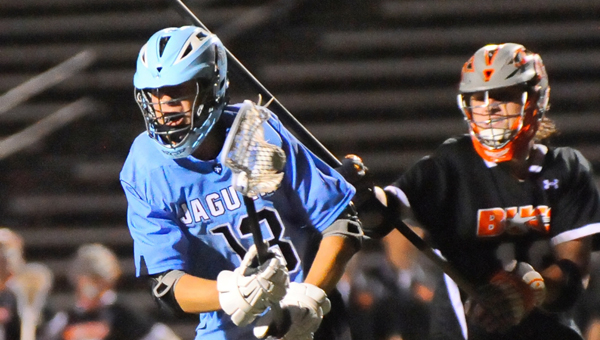 The Spain Park lacrosse Jaguars beat Vestavia Hills on May 2 to win the Division I lacrosse state championship. Spain Park ended the season with an 18-1 record. (Contributed / Ted Melton at Actionsportspix.smugmug.com)

NORTH SHELBY – The Spain Park Jaguars lacrosse team finished the season with an 18-1 record and a state title under their belt. The only blemish on the Jaguars record this season came against Vestavia on March 21 by a final score of 11-7. The two teams met again on April 16, and the Jaguars came out on top in that game by a final of 11-10 to bring the regular season series to a draw. The third time the two schools met was in the Division I championship on May 2, and Spain Park was able to once again avenge its only loss of the season in the most satisfying way.

In the semifinals, Spain Park defeated crosstown rival Hoover by a final score of 14-13 to earn a berth in the championship game. The championship, which took place at Spain Park’s campus, matched two of the top programs in the state against each other in the Jaguars and Rebels, and the game did not disappoint.

Vestavia scored first in the early going to give the Rebels an early 1-0 lead. Spain Park answered with three straight goals to take a 3-1 lead and never looked back. The Rebels drew close a number of times, and even tied the game at 3-3, but never gained the lead back after they held it at 1-0. From 3-3, the Jaguars ripped off four straight goals, capped by Air Force signee Trent Harper’s goal to make the score 7-3. Vestavia however refused to go away, and responded with three goals of its own before halftime to bring the score back to a one-goal game at 7-6.

In the early goings of the second half, Spain Park and Vestavia traded goals to make the score 8-7. Two goals for the Jaguars and one for the Rebels gave Spain Park a little more breathing room, as they led 10-8. Vestavia never closed the gap lower than two goals the rest of the way, and the Jaguars hung on to complete their dominant season with a 14-12 championship win.

Pelham blanks Southside Gadsden to advance to 6A Final Four