Thompson takes out Vestavia Hills, moves on to semifinals 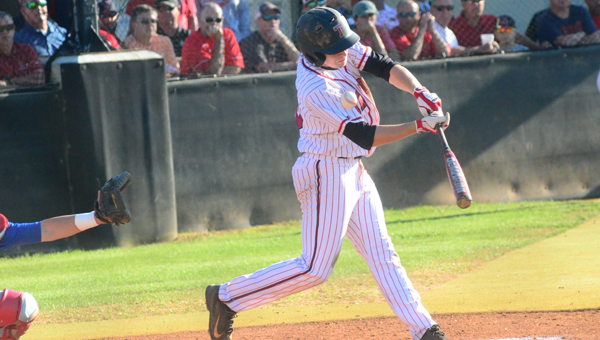 Colin Lillie gets a piece of a pitch in the first game of the Warriors second-round playoff series with Vestavia Hills on May 1. Lillie and the Warriors knocked off the Rebels in two games, 10-0 and 1-0, to advance to the 7A semifinals. (Reporter Photo / Baker Ellis)

ALABASTER – One week after knocking No. 2 Mountain Brook out in the first round of the 7A playoffs in three games, the No. 3 Warriors from Thompson (29-15) squared off against No. 1 Vestavia Hills for a berth in the semifinals. This series was not as dramatic as the previous one, as Thompson needed only two games to knock off the Rebels, who didn’t register a single run in the series.

As he has done often this year, Colin Lillie climbed the mound for Thompson to start the game and pitched a gem. Lillie allowed just five hits and no runs while striking out six on the day to lead the Warriors to the opening game win in just six innings.

The second member of Thompson’s two-headed pitching monster, Poplin, took the mound for the Warriors in the second game of the series. Poplin hurled seven innings, only threw 54 pitches and allowed just two hits in the game while also surrendering no runs.

The only run of the second game came in the top of the third inning. Brammer laid down a bunt on the first pitch of the third inning, and advanced all the way to third base when Sonny Potter, the Vestavia pitcher, overthrew the first baseman. Reach singled just two pitches later to bring Brammer home. The Warriors offense could not muster much more the rest of the way, but Poplin made sure the sliver of a lead was enough to win the game and the series.

The Warriors have run the gauntlet in their first two rounds of the state tournament, knocking off the top two teams in the state to advance to the semifinals. Thompson will take on Sparkman in the semifinals for a shot at the state title.

Mariah Poe and the Thompson Lady Warriors got the best of Vestavia in their first meeting on March 27, but... read more