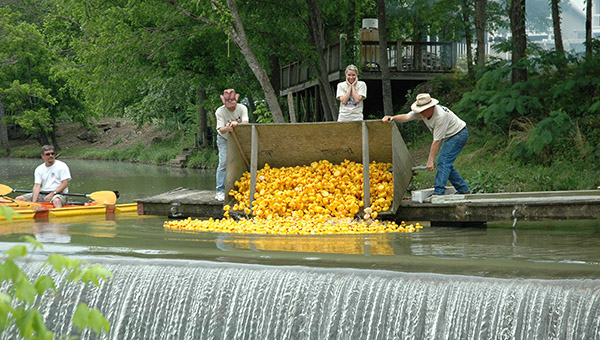 The Buck Creek Festival Committee will unveil a new “Duck Dumper” this weekend at the festival’s annual Duck Race. (File)

HELENA–Helena’s Buck Creek Festival Committee will debut a new “Duck Dumper” at the festival’s annual Duck Race this weekend. Ducks are released above the Buck Creek waterfall and race to the finish line, where prizes are awarded for first, second and third place finishers.

The duck race is the most significant fundraiser for the festival, which has donated over $200,000 to local charities and civic groups through the festival’s 14-year history.

Previously, volunteers loaded the ducks into a 400 pound treated plywood box, and pushed it out into the middle of Buck Creek on a floating dock-like structure.

Issues with weight and safety caused festival organizers to brainstorm a new way to get the ducks into the creek for the famous Duck Race, and a team of volunteers was charged with planning a new way to dump the ducks.

Buck Creek Festival volunteers Jack Gray, Tommy Nelson, TJ Joseph and Lucas Jones have worked to design and fabricate the new dumper, which will sit on a pontoon boat that has been outfitted with a trolling motor. Gray and Nelson acquired the boat and motor, named the Ms. “Quack”, and prepared it for the new duck dumper. Joseph and Jones designed the new dumper, and are in charge of fabrication and installation.

The new duck dumper is constructed from MayTec aluminum framing, weighs less than 100 pounds and uses a hinged trap door with a lever to release the ducks into the water.

Fitz-Thors Engineering, Alabama’s only distributor of MayTec products, provided the framing materials at cost, as well as the work space for construction. The new duck dumper will hold over 400 pounds of weight, or approximately 2000 ducks.

“We’re excited about the new duck dumper this year, “ said Buck Creek Festival organizer Cris Nelson. “It will be much safer and easier to use, which is something I think our volunteers will be really happy about.”

Christening of the Ms. “Quack” will take place on the upper banks of Buck Creek on Saturday, May 9 immediately preceding the duck race.

For more information, contact Cris Nelson at Bcfestival@bellsouth.net or 296-6153.