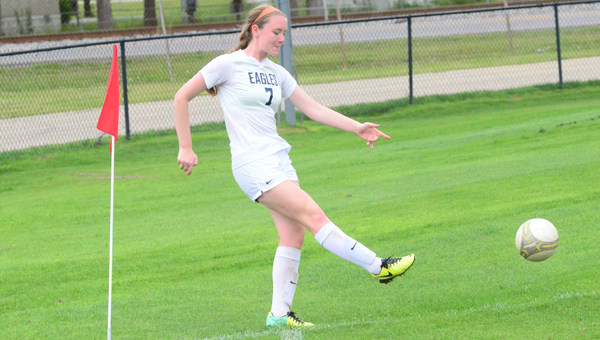 Anna Milliron and the Calera Lady Eagles are headed to the 4A-5A Final Four after beating Sipsey Valley 6-0 on May 2. The Lady Eagles will take on second-ranked St. Paul’s on Thursday, May 7 for a shot at the 4A-5A state title. (Reporter Photo / Baker Ellis)

CALERA – The Calera Lady Eagles soccer program finished the regular season ranked eighth in the state in class 4A-5A, according to Eurosportscoreboard.com. The Lady Eagles were 7-5-0 with a few nasty losses on their record, including a 10-0 loss to Thompson early in the season, a pair of 4-0 losses to Homewood and Indian Springs and a 5-0 loss at the hands of Chelsea. The Lady Eagles were not without their signature wins as well in the regular season, including a 3-1 win over 6A No.2 Briarwood on April 7, but for the most part, Calera came into the 4A-5A state tournament with some questions hanging over its head as to just how far this team could go.

Three games into the playoffs, that question now seems like it should have never been asked. Through the first three round of the 4A-5A state tournament, Calera has outscored opponents by an incredible 25 goals, 27 for and two against. The first game of the playoffs was against hapless Ramsay, who had only won two games all year, both against an even worse, winless A.H Parker, and beat the Lady Rams 10-0.

Next up for Calera was the Area 8 winner Carver High School out of Birmingham. Calera breezed by Carver as well, winning the second-round contest by a final score of 11-2. In the quarterfinal matchup, Calera hosted Area 6 winner Sipsey Valley for a chance at the state semifinals. Calera once again coasted to victory via a 6-0 decision to move into the 4A-5A Final Four, which will take place in Huntsville later this week.

The Lady Eagles will play a different level of competition in the state semifinals, as they will square off against Area 1 winner and second-ranked St. Paul’s in Hunstville at 4:45 p.m. on Thursday, May 7 for a shot at the state title. St. Paul’s sports a 17-4-2 record and has faced a harder road to the semifinals than Calera has, however the Lady Eagles will look to continue their incendiary scoring pace against the Lady Saints and move into the state championship, where Calera woud play either Randolph or Guntersville.

The Pelham Lady Panthers moved to 17-8 after hosting the 6A Area 8 tournament from April 30-May 1. Pelham finished... read more