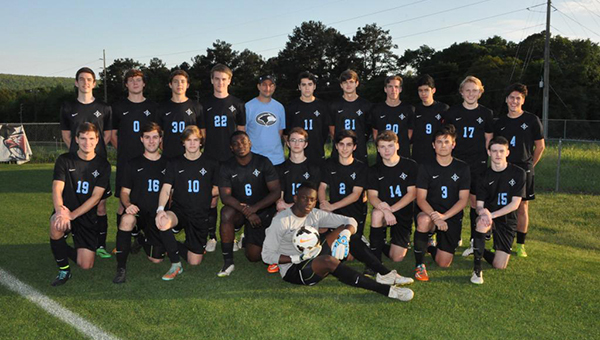 The Helena Huskies boys soccer team advanced to the semifinals of the state playoffs after defeating Marbury 4-0. (Contributed)

HELENA–As impressive as the Helena Huskies offense has been this year, the defense has not allowed opponents to net a single goal thus far in the playoffs and that trend continued on Saturday, May 2 as the Huskies took down the Marbury Bulldogs 4-0.

Helena once again used their fast, attacking style of play to break through for four goals as Cael Cranor scored two goals, Landon Gaskins scored a penalty kick and Matt Sheets added another goal for the Huskies.

Helena head coach Zach Morgan praised the offense but also gave credit to the good work his goalkeepers have done throughout the playoffs.

“We played well and I’m thankful our defense has played so well,” said Morgan. “Both goal keepers Phildon Dublin and Seth Key have done great this year and Dublin had a good game tonight. The success also goes with having a good front four and the goalkeepers deserve recognition for not allowing any goals.”

Offensively, the Huskies have used the same strategy to try and score goals and Morgan discussed how they have been successful this year.

“A lot of teams try to put as many defenders back there and park the bus as we say,” said Morgan. “We try to emphasize to put it to the outside and draw defenders to the ball and open up the middle to score some goals.”

Helena is one of four teams remaining in the AHSAA 4A-5A boys soccer state championship bracket and the Huskies will travel to Huntsville on Thursday, May 7 to face St. Paul’s.

St. Paul’s defeated Eufaula 6-0 to advance to the semifinals to face Helena.

If Helena defeats St. Paul’s Thursday, they will advance to the state championship game on Friday, May 8 to face either Sylacauga or Randolph.

“They definitely will be a hard opponent and we will be working hard this week,” Morgan said of the semifinals matchup with St. Paul’s.

The Helena High School baseball program was placed on probation for one year and fined $1,000 by the AHSAA following... read more