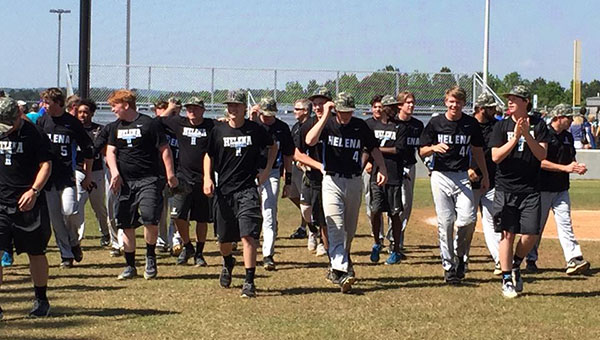 The Helena Huskies baseball team defeated the Marbury Bulldogs two of three games to advance to the 5A Baseball Semifinals. (Contributed)

HELENA–The Helena High School baseball stadium saw action for the very first time on Friday, May 1 and Saturday, May 2 and there was no better time to break in the stadium than to play host to a third-round playoff series between Helena and Marbury.

The series was packed with three exciting games and after the Huskies dropped game one 3-8, Helena was able to climb out of the hole and win the next two games 2-1 and 6-5 to advance to the AHSAA Boys 5A baseball Final Four.

The inaugural baseball game at Helena’s new baseball stadium was spoiled by the Marbury Bulldogs as they defeated Helena 8-3 in the series opener.

Marbury broke the game open in the top of the fifth inning when the Bulldogs scored four runs to push it’s lead to 6-1.

A sacrifice fly scored Coleman Fleming for the first run in the top of the fifth and then followed up by Wallace Henry’s bases clearing triple to score Nixon, Will Lyons and Brett Spires.

Henry was the winning pitcher for the Bulldogs after striking out an impressive 13 Helena batters over the course of seven innings.

Game two of the doubleheader did not see as much offense and a pitcher’s duel broke out between Helena’s Brooks Freeman and Marbury’s Jared Nixon as both pitchers pitched well into the game to help their team.

Nixon lasted seven innings, but the Bulldogs offense wasn’t able to pick up enough runs and Nixon recorded a loss.

Freeman pitched five innings and struck out four and got just enough help from his offense to get the victory.

Helena took the lead for good when Riley Davis doubled in the top of the third to score Robbie Lively and preserve the 2-1 victory.

Helena overcame a five-run deficit and came back to defeat Marbury 6-5 in a decisive and exciting final game of the series.

Down 5-0 after the top of the second inning, Helena collected three runs in the bottom of the second to cut the Bulldogs lead to 5-3.

In the very next inning Helena scored two more runs to tie the game at five.

Neither team could push a run across over the next three innings, and going to the bottom of the seventh inning Helena needed a run to advance to the semifinals.

A line drive single to centerfield by Lively scored Kade Jones and allowed the Huskies to win in walk-off fashion and grab the 6-5 victory.

The Helena Huskies boys soccer team advanced to the semifinals of the state playoffs after defeating Marbury 4-0. (Contributed) By... read more