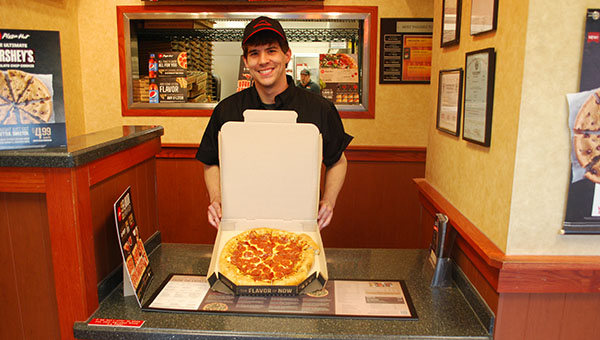 HELENA–Oftentimes we hear the phrase “that’s a shame all that food went to waste,” but at the Pizza Hut located at 495 Helena Market Place in Helena that phrase won’t be heard.

Whenever an order is accidentally messed up and a customer wants a new pizza, the Helena Pizza Hut doesn’t just trash the food where it goes to waste.

The food is instead placed in the freezer where it can be kept fresh up to 21 days and those less fortunate also have the opportunity to enjoy pizza.

Helena Pizza Hut General Manager Ben Hitt has been managing the restaurant since last year and didn’t like the fact that food was being thrown away in the past, and he decided to take action.

“We were throwing a lot away and I started putting it in the freezer,” said Hitt. “Oak Mountain Missions will come pick up the food about every two weeks and they will donate a lot of the food. The pizza is mainly for the kids who don’t ever get to eat out and pizza is seen almost like a luxury to them.”

Ever since Hitt moved to Helena he said his favorite thing about it is the small town atmosphere.

One of Hitt’s employees Blake Hubka had nothing but good things to say about Hitt as a manager and the job the Helena Pizza Hut location does with donating the food.

“For as long as Ben has been the manager he has been donating the food,” said Hubka. “One time Ben let another employee borrow his car for prom and that just shows the kind of character he has.”

Whenever Oak Mountain Missions arrives to collect the food, Hitt said that they always weigh, take the temperature and write down the dates for the food before taking it as safety precautions.

Chelsea Middle School students spent the afternoon of May 1 covering each other in food, mud and powder paint to... read more