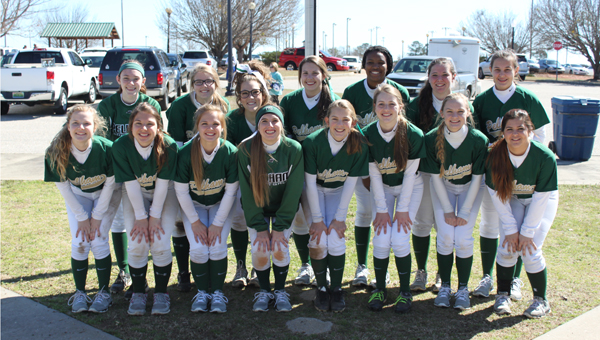 The Pelham Lady Panthers moved to 17-8 after hosting the 6A Area 8 tournament from April 30-May 1. Pelham finished second in the tournament to Hueytown and will face Hillcrest-Tuscallosa in the opening round of the South-Central Regional. (Contributed)

PELHAM – The Pelham softball Lady Panthers qualified for the South-Central Regional tournament with a second-place finish in the 6A Area 8 tournament, which took place over a two-day span from April 30-May 1. The Lady Panthers went 2-2 in the tournament, which they hosted, with both losses coming to Area 6 champion Hueytown. The two games Pelham won in the tournament came against Jackson-Olin and John Carroll, respectively, and won the two games by a combined score of 35-4.

In the opening game of the tournament, Pelham defeated Jackson-Olin 15-0. Next up was area rival Hueytown, who Pelham had defeated twice in the regular season in two close games on March 24 and April 7 to sweep the regular season series. The Lady Panthers could not continue their winning ways against Hueytown in the area tournament, and dropped the second round game by a final score of 12-8. In the consolation bracket, Pelham eviscerated John Carroll Catholic 20-4 to earn another shot at Hueytown for the area title.

In the second game between the two schools in less than a day, Hannah Pritchett took the mound for the Lady Panthers and threw a complete game, seven-inning effort. Pritchett hurled 117 pitches in her seven innings of work, gave up 13 hits and six runs while striking out three.

With the score tied at 3-3 heading into the sixth inning, the Hueytown bats came alive for a three-run sixth inning that proved to be too much for the Lady Panthers to recover from. Hueytown used two pitchers in the game, and Pelham only mustered seven total hits. Pritchett scored in the bottom of the sixth inning via a Dalton Merrill single to cut the lead to 6-4, but could not muster any more offense in the game, and finished second in the area.

Pelham advanced to 17-8 after the area tournament, and will face Area 6 winner Hillcrest-Tuscaloosa in the opening round of the South-Central Regional.

Kyandi Tipler and the Spain Park Lady Jaguars softball team defeated Hewitt-Trussville twice on their way to claiming the 7A... read more