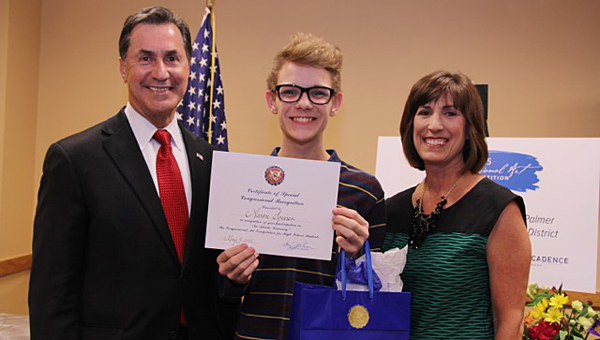 Pelham High School junior Aaron Squires, center, was honored during a May 4 ceremony at the Hoover Public Library. (Contributed)

HOOVER – Pelham High School junior Aaron Squires’ artwork will go a little farther than the walls of his school over the next year after he beat out several other local students in a recent congressional art contest.

Squires’ artwork, which depicts a pair of women facing each other while their hair blows in the wind, was recognized by the judges for its “symmetry and restrained use of color, which draws the viewer in and holds us captive.

“When viewed from a distance, the symmetry of design is striking. The two shapes mirroring each other pleases the eye,” read the judges’ commentary.

Judges for this year’s competition were Amy Crews, a nationally recognized artist who has been featured in Southern Living At HOME, included in an HGTV Dream Home, and has her work on display in the Alabama’s Governor’s mansion; Meredith Keith, who has been featured in Birmingham’s B-Metro Magazine, Black and White, City Scene and Nashville Arts Magazine; and Janet Sanders, who has served as both president and show chairman of the Mountain Brook Art Association, as well as a master docent at the Birmingham Museum of Art.

All participants in the art competition were recognized at a reception hosted by Palmer at the Hoover Public Library on May 4. The competition was open to all schools in the 6th Congressional District, which is comprised of parts of Shelby, Jefferson, Blount, Bibb Chilton and Coosa counties.

As a result of winning the competition, Squires’ work will hang in the United States Capitol Building for the next year. He also received $400 and an all-expenses-paid trip to Washington, D.C., where he will present his winning artwork during a Capitol reception.