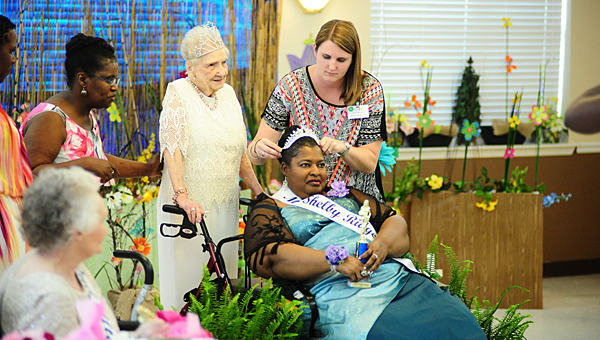 ALABASTER – Carolyn Blunt was still wide-eyed in amazement after dozens of cameras and cell phones finished snapping photos of her and the other five contestants in the 2015 Miss Shelby Ridge Pageant on May 5.

“Yes, very,” the soft-spoken Blunt said with a smile when asked if she was surprised when the judges announced her as the pageant winner.

As winner of the Shelby Ridge pageant, Blunt will move on to the Miss Alabama Nursing Home Pageant this summer at the Wynfrey Hotel in Hoover.

“I’m going to rest for awhile first,” Blunt said with a laugh. “I’m looking forward to getting started (preparing) after that.”

During the public question-and-answer session, Blunt was asked about the most exciting experience in her life, to which she replied, “Living in Hawaii.” While introducing Blunt, event emcee Gene Rowley, of the APH Radio station, said she is the mother of three and “Praises God in everything she does.”

Patricia Bradberry greeted visitors at the door, and Kimberley Holmes and Tayna Thomas provided hair and makeup services for the contestants.

Before crowning her successor, reigning Miss Shelby Ridge Bessie Smitherman had a few words of encouragement for her friend Blunt.

“What a great honor it is to be crowned Miss Shelby Ridge,” Smitherman said.

7A girls have good showings at state meet