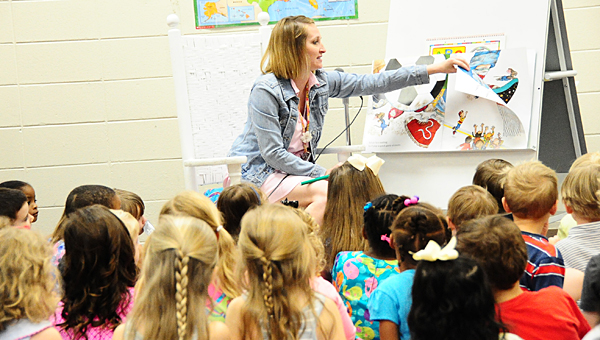 Creek View Elementary School kindergarten teacher Paige Pearson reads “If you Give a Mouse a Cookie” to the school’s incoming kindergarteners on May 6. (Reporter Photo/Neal Wagner)

ALABASTER – Five-year-old Xan Powell had already identified his favorite parts of Creek View Elementary School a few minutes after taking a walking tour of the school on May 6.

“The playground,” Powell said excitedly when asked about his favorite part of the tour.

After a brief pause to expel some energy by running about 10 feet from his mother, Claudia, to the school’s front door and back, Xan added to the list.

“I like the gym too, because you get to play with everyone,” he said while hugging his mother’s leg.

The Powells were among nearly 100 Alabaster families with incoming kindergarteners who visited CVES on the morning of May 6 to get an idea of what school will be like beginning in August.

During the visit, the incoming kindergarteners enjoyed story time and a snack, viewed a slideshow of the school’s staff and toured the CVES computer lab, library, playground and more. 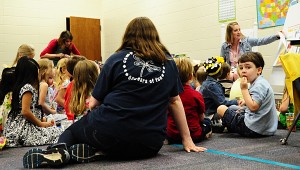 “We are so thrilled you are here today, and will be here in a few months,” CVES Principal Charissa Cole told the families. “We have the best faculty and staff in the state of Alabama.”

Xan is not the first in his family to attend CVES, and has heard good things about the school from his older brother, Claudia Powell said.

“We’ve had a really good experience with this school,” she said.

The playground was a popular answer when the soon-to-be students were asked about their favorite part of the morning.

“He’s our final one (to enter school),” Kara Marchman said of Riley. “He is super-excited about it.”

Incoming kindergartener Aubrey Gaiters said she will enjoy going outside and working with computers at school each day. However, she may have to work past a few first-day jitters first.

“You’ve got to start school,” Aubrey’s mother, Ashley, said while answering a question from her daughter.

“No, you’ve got a few months,” Ashley Gaiters said.

A HES student points out his artwork at the Family Night at the Art Show on Tuesday, May 5. (Reporter... read more