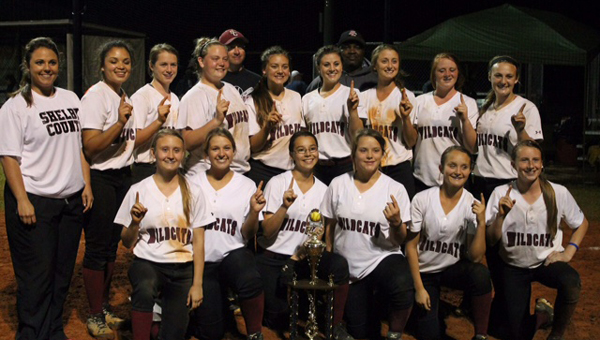 The Shelby County Lady Wildcats softball team will enter the South Central Regional with a 17-8 record and a class 5A Area 8 championship under their belt. (Contributed)

The Shelby County Lady Wildcats softball team is entering the 5A South Central Regional on May 8 with an Area 8 championship under their belt and a 17-8 record to boot. The Area 8 championship did not come without its hurdles, however. In the second game of the area tournament, Shelby County dropped a game to eventual Area 8 runner-up Clay-Central. From the consolation bracket, the Lady Wildcats clawed their way back into contention and beat Clay-Central twice in a row to claim the championship to take some positive momentum into the regional tournament.

This Lady Wildcats team has no seniors and only two juniors, populated instead primarily by sophomores and freshman, along with an eighth grader and a seventh grader who have helped the teams batting average. Brooklynn Phillips, the assistant coach for Shelby County, said the team has had a quietly impressive season.

“Our goal was to at least make it to the playoffs,” Phillips said in a May 6 interview. “This year has gone way better than we expected.”

This team has primarily been lead by Alex Reed, a sophomore pitcher who has led the way from the mound for the Lady Wildcats, and Ashlyn Blaneknship, a freshman who has the best batting average on the team with an average in the .460s according to Phillips.

Hitting is the primary facet of the game this Lady Wildcats team relies on when the chips are down. “When we come together as a team our hitting is very strong,” Phillips said.

Shelby County may seem incredibly young this season, and to an extent that is the case. However, according to Phillips the Lady Wildcats usually rely on some underclassmen to help lead the way.

“We lost quite a few seniors last year,” Phillips said. “It’s usually half and half with upper and lowerclassmen.”

Regardless of the age of the teams’ inhabitants, Shelby County has made the playoffs the last seven consecutive years and has consistently been an above average softball team. As far as this years’ playoffs are concerned, Phillips believes this squad can make it to state.

“If we win three in a row (at regionals) we’re in state,” Phillips said. “We’ll see what happens.”

7A girls have good showings at state meet