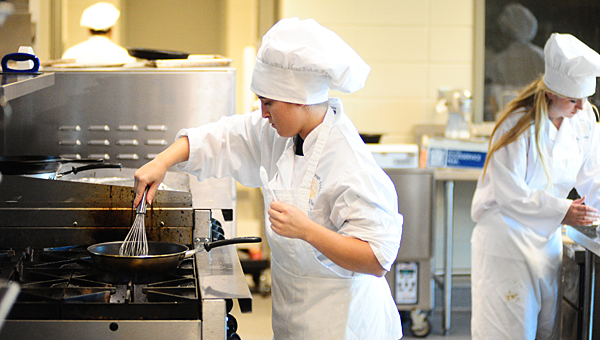 Pelham High School student Medison Ledford prepares food during a culinary competition at the school on May 7. (Reporter Photo/Neal Wagner)

The culinary 2 class was working on the cooking portion of their final exam, which was structured much like Food Network’s popular show, “Chopped.”

The students do not know the ingredients they will be given — a boneless pork chop, sweet potato, carrot, and zucchini for today’s class — and must create a restaurant-worthy plate using the techniques they have learned during the year.

Then, students were judged on taste as well as sanitation, technique, safety and using the materials correctly.

“If they find something at this age they’re passionate about, it’s going to help them in the future,” Weaver said.

Smith stressed the importance of the culinary arts program to Pelham High School.

“This gives them real-world experiences,” Smith said. “This program has grown and the kids are excited about it. This is one of my favorite places to visit.”

This is not the first competition PHS culinary arts students have participated in: A group from the school won second place at the state FCCLA competition, and PHS student Alex Rodriguez was awarded a full scholarship to Jefferson State in the For the Love of Cooking contest.

For culinary arts teacher Doug Allen, preparing the students to work in the industry is of paramount importance.

“I came from the industry, and I teach them about real life,” Allen said, noting all of the equipment in the PHS culinary arts kitchen is industry standard equipment, which allows students to become accustomed to a commercial kitchen.

“This makes kids industry-ready,” Allen said. “They can go out and get jobs, because they’re prepared.”

Helena was named one of three Shelby County cities to make the list of most affordable places to live in... read more