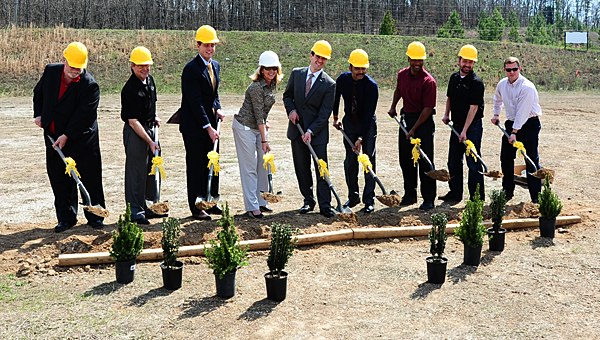 Alabaster leaders join developers in breaking ground on a new Holiday Inn Express behind the Propst Promenade shopping center in mid-March. The city has seen a surge in new businesses so far this year. (File)

ALABASTER – Ward 7 Alabaster City Council member Tommy Ryals reads the city’s new home and business permit report during the council’s final meeting of each month, but he did so with a little more enthusiasm than usual on April 27.

The first three months of 2015 marked the strongest economic start for Alabaster in several years, thanks primarily to a slew of new businesses coming to the city and several existing businesses renovating.

From the beginning of the year through the end of March, the Alabaster Department of Building Safety had issued a total of seven new commercial building permits for projects valued at a total of more than $11.5 million.

Through the first three months of 2014, the city had issued zero new commercial building permits.

On the residential side, the Department of Building Safety had issued 14 new home building permits through the end of March this year, compared to 13 during the same time last year.