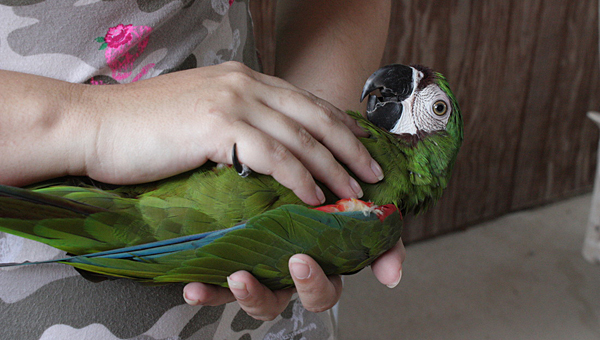 PELHAM – For Robbin Fontenot, parrots are more than just a hobby; parrots are her passion.

Fontenot is founder and director of Parrots of Pelham, which she runs with business partner and co-worker, Ashley Skelton.

Parrots of Pelham got its start a little more than two years ago, when Fontenot moved with her husband to Pelham from Gulf Shores.

Fontenot had originally founded a non-profit organization, Gulf Coast Avian Association, where she joined forces with other trained professionals to provide grooming and behavior training at no cost, but when she moved to Pelham the demand became too great for the business to remain a non-profit, so Parrots of Pelham was formed.

The organization provides a variety of aid to bird owners, such as in-home behavior training, phone consultations, and grooming as well as bird shows for parties and special events.

Fontenot began with one cockatiel, Jojo, but her collection grew to include more than eight birds: three cockatoos, a blue and gold macaw, a military macaw, two eclectus parrots, an African grey parrot, a golden-collard macaw, as well as several small breeder birds.

Getting parrots can be “a little addictive,” Fontenot said, noting that the species is very loyal and intelligent.

“If you get them and train them right, they can be just as loyal as any dog,” Fontenot said. “You can just learn so much from them.”

Parrots of Pelham also provides a service, which helps people interested in buying a bird choose a type of pet depending on their lifestyle.

“I always say, ‘You’re one of two types of people. You’re either a bird owner or you’re a potential bird owner,'” Fontenot said.

In addition, Fontenot hosts educational bird shows for schools, churches and other organizations where attendees can learn about the various types of parrots, as well as where they came from and what to expect when owning a parrot.

“It’s all educational, they get to learn about all sorts of other birds that we may not have as well,” Fontenot explained. “The kids love it, and they learn something from it.”

For more information on Parrots of Pelham, visit Gulfcoastavian.com.