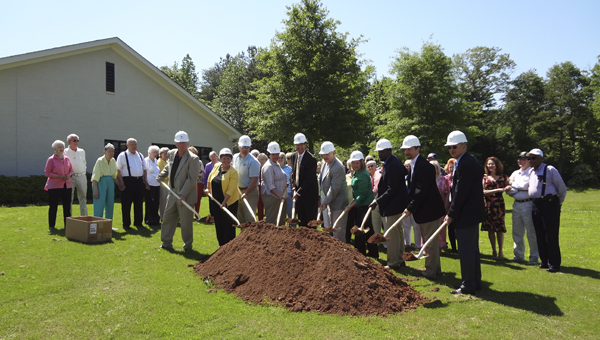 PELHAM – Spirits were high among dozens of Pelham residents and city officials at the Pelham Senior Center on May 7 as they marked the start of the facility’s 1,500-square-foot expansion project with a groundbreaking ceremony.

“We finally got to this point,” Pelham Senior Center and public library director Barbara Roberts said. “It’s been a long road that we’ve gone down to get to this point.”

Built in 2005, the facility houses weekly meals, activities and social gatherings for nearly 300 senior residents in the area.

The project will create more space for the center’s members and will include replacing the central room’s tile floor with an engineered wooden floor more suitable and safe for activities such as line dancing, Roberts said.

“It was very clear to me that you guys needed a much bigger facility,” City Council President Rick Hayes said. “Ten years later, you guys have thoroughly outgrown it.”

The central room of the center will double in size to 30,000 square feet when additions to the sides and back of the room are complete, Roberts said, and construction is expected to last about three months.

Roberts said the city has appropriated roughly $138,000 for the project, which is set to start in the next week.

“We will use this building as long as we can, but if it gets to where it’s a safety issue, we will move to the civic complex,” Roberts said.

Mayor Gary Waters, City Council members, architect Rick Lathan with Lathan Associates, construction manager Brad Davis with Wayne Davis Construction and Bobby Hayes, who was Pelham’s mayor when the facility was built, were present for the ceremony May 7.

“This is something that we really needed,” Bobby Hayes said. “This is going to be a tremendous addition and give you a little more room. We look forward to the completion of the project.”

Hiett and Brisendine looking forward to continuing their volleyball careers