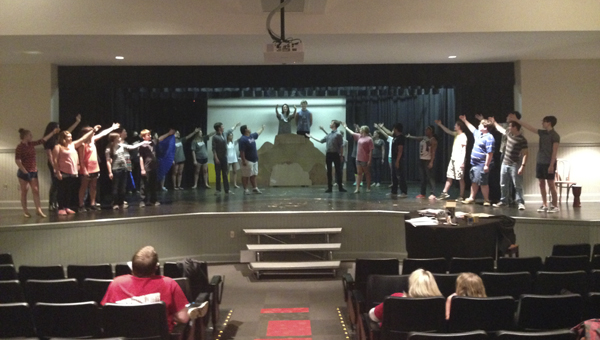 The Shelby County High School Theatre Department will present Disney’s “The Lion King” May 14-17 in the SCHS auditorium. (Contributed)

COLUMBIANA – On May 14-17, the auditorium of Shelby County High School will be transformed into the Pridelands of South Africa as the SCHS Theatre Department presents Disney’s “The Lion King.”

The musical is based on the classic Disney animated tale and the Broadway production directed by Julie Taymor.

From a directing perspective, artistic director Kathryn Andrews Myrick says, “This show has been the most difficult show I’ve directed in my 18 years at SCHS, but I think the effort and hard work of all our actors will really be apparent when you see this production.”

Music director Ashlyn Delianides has had to teach the cast a new language for many of the musical numbers, mostly involving the Zulu language, and the students have responded to this challenge beautifully.

Choreography has also been an ongoing part of rehearsals, and choreographer Ashley Venable has created choreography that is fun, yet invokes many of the African customs of dance.

Of course, all favorite tunes from “The Lion King” are in the show as well, such as “Hakuna Matata,” “I Just Can’t Wait to be King” and “The Circle of Life,” just to name a few.

The costumes and headpieces for many of the characters, specifically the lions and hyenas, were designed by SCHS alum Saren Binkerd, who specializes in mask design and other works of art.

SCHS Art teacher Laura Alvord, along with her Art II and Art II students created the numerous masks for the animal ensemble characters featured in the show.

Both ladies had their work cut out for them, but did capture the look of the animals of South Africa.

Tickets for the show are $3 for students and $5 for adults and can be purchased the night of the show.

A limited supply of souvenir T-shirts will also be available for sale for $15, as well as souvenir programs listing all of the cast’s biographies, and other educational information relating to the language used in “The Lion King.”

By NEAL WAGNER / Managing Editor A trio of Shelby County students each won $2,500 after they were named National... read more