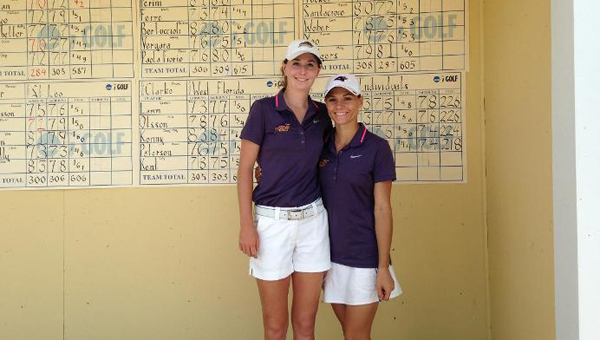 Elaine Wood (left) and Arin Eddy, both of Montevallo, finished tied for 16th in the Women’s Golf South Super Regional from May 2-5. (Contributed)

SAVANNAH, Ga. – University of Montevallo sophomores Elaine Wood and Arin Eddy competed in the NCAA Division II Women’s Golf South Super Regional from May 2-5. The two qualified for the tournament based on exemplary performances throughout the 2014-15 season. Both Wood and Eddy finished the three-day tournament with 10-over par 226s, placing them in a tie for 16th place.

Wood, the 2014-15 Peach Belt Conference Golfer of the Year, made her second consecutive appearance at the tournament, placing in a tie for 14th place during her freshman season. In her first round, the Spanish Fort native shot a one-over par 73. In the second round, she shot a three-over par 75, and she shot a six-over par 78 in the third and final round.

Eddy, a First Team All-PBC selection this season, won three tournaments in just a semester at UM. She shot a one-over par 73 in the first round, a five-over par 77 in the second round, and a four-over par 76 to close out the tournament.

Wood and Eddy were instrumental in leading the Falcons to the first ever women’s golf conference championship in school history this season, finishing first and second at the PBC Tournament.

As a team, the Falcons narrowly missed earning a regional bid. Montevallo was ranked 10th in the latest regional poll, and only nine teams make the tournament. UM was ranked in the Top 25 for the majority of the year, ending the season as the #19 team in the country.

“We were very grateful for the opportunity to compete in the region tournament for the University of Montevallo,” said Wood. “We may not have played our best this year in this tournament, but we will use it as a learning experience for when we are back the next couple of years as a team.”

University of Montevallo junior Steven Knudson was named the Peach Belt Conference Player of the Week for the second time... read more