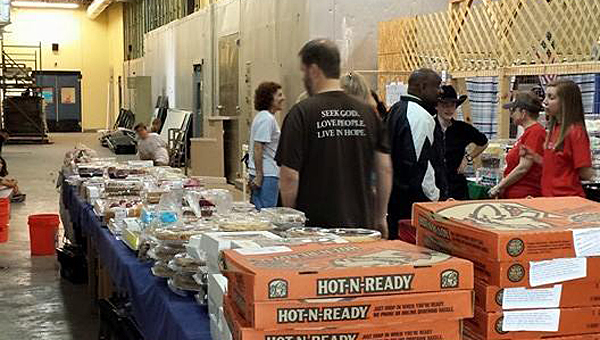 Manna Ministries, which currently occupies a portion of the Alabaster First United Methodist Church Restore building, is looking for a new home. (Contributed)

ALABASTER – Manna Ministries, which provides food to about 70 people in need each Saturday morning, is looking for a permanent home after it was recently notified it will lose its current space at Alabaster First United Methodist Church.

Manna Ministries Director Phillis Harbin said the church recently notified the charity it must move by June 1. Manna currently occupies a portion of the Methodist Church’s Restore building, which once was a Winn Dixie grocery store next to the church’s main building off Alabama 119.

“We have to be out by June 1, so we are temporarily moving to Shepherd’s Harvest Church on Smokey Road,” Harbin said. “But that’s strictly a temporary thing. Eventually, we would like to have our own piece of property and our own building.”

The Methodist Church currently uses only a portion of the former Winn Dixie building, and has converted a portion of the facility to a large auditorium and foyer. Manna has been using the back of the building – Which has not yet been converted from its grocery store setup – as its base of operations since 2012.

Alabaster First United Methodist Pastor Sherry Harris said growth in the church’s membership and programs has made it necessary for the church to use the entire Restore building.

“Ministries at Alabaster FUMC involving children, youth, Boy Scouts, Girl Scouts, small groups and other services to the community have grown to the point that the church needed to be able to utilize the space Manna has being using since 2012,” Harris wrote in an email. “Manna is an independent 501c-3 with its own governing board completely separate from Alabaster FUMC. We wish them well in their ministry and will continue to support them in their efforts to provide food for the community.”

Harbin said Manna is preparing to purchase a 12-by-24-foot storage facility to use while at Shepherd’s Harvest Church, which will hold its food reserves, freezer and refrigerators.

Harbin said Manna is now looking for local land to house a permanent location, and encouraged anyone willing to help to call her at 910-4098, or email Phmanna@charter.net.

“Our dream is to one day get all of the churches to use us as a warehouse and join forces with us instead of each separate church doing their own food banks,” Harbin said. “It’s a community thing. It’s by no means a denominational thing.

“If we get up under our own roof, I think churches will start coming to us,” Harbin added.

Hunter Ratliff celebrates his first goal of two in the May 8 7A state semifinal game against Bob Jones. Ratliff... read more