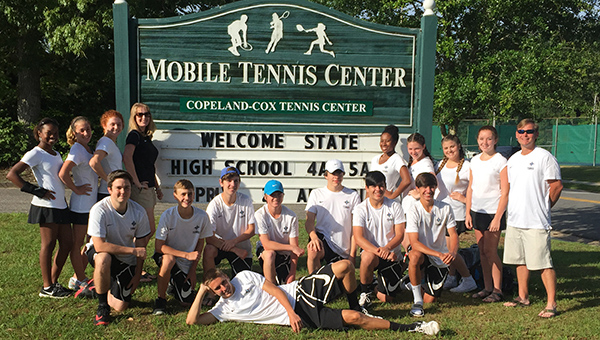 The Helena High School boys and girls tennis teams both qualified for the state tournament in Mobile. (Contributed)

HELENA–The Helena boys and girls tennis teams recently completed their seasons, and both teams recorded successful finishes in their first year being programs.

The boys team ended up winning their section while the girls team were section runner-ups. Because each team finished strong in their section, both qualified for the state tournament that was held in Mobile in late April.

The boys team finished in ninth place at the state tournament and the girls finished in 10th place.

Helena girls head coach Stephanie White was in her first year coaching the team, and she was pleased with how the girls finished and competed all year.

“I really am proud of them for really all of their performances,” said White. “They’ve come a really long way over the season. My goal for them when we went to state was for everybody to at least win their first round match, and everybody did that in either singles or doubles, so that was our goal for this year.”

The teams practiced during the year at Joe Tucker Park and White was grateful for Jason Powers and Helena Parks and Recreation.

“Jason Powers at Helena Parks and Recreation was awesome,” said White. “He pretty much gave us carte blanche when we wanted to use the courts, what days, what times and he had a sign made and had it hanging on the courts for us.”

The weather was also a tough thing to contend with all year as the courts became extremely wet for most of the spring due to the large amounts of rain and that was another thing White noted both teams had to deal with.

The teams held their end of the year banquet on Sunday, May 3, and the following players received awards: The Most Improved Player awards went to Hallie Harper and Parker Cunningham and the Highest GPA awards went to Sarah Beth Dolinger and Landon Genry.

The Helena Huskies baseball team defeated the Marbury Bulldogs two of three games to advance to the 5A Baseball Semifinals.... read more