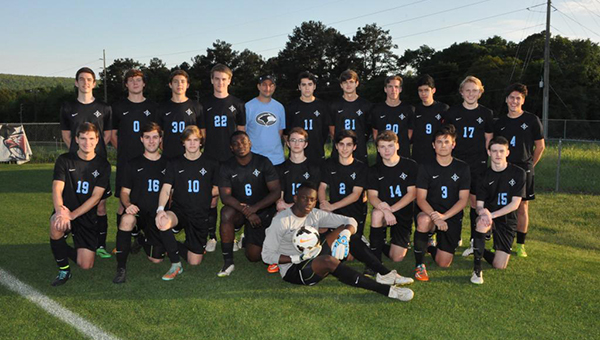 The Helena Huskies boys soccer team fell in the AHSAA 4A-5A soccer semifinals 3-0 to St. Paul’s on Thursday, May 7.(Contributed)

HUNTSVILLE–The Helena boys soccer team’s hopes of making a run to the AHSAA 4A-5A soccer state championship fell short at the hands of the St. Paul’s Saints 3-0 in the semifinals of the tournament on Thursday, May 7, in Huntsville.

The Huskies players and head coach Zach Morgan knew St. Paul’s would be a tough opponent, and they were not wrong, as the Saints were able to wear down Helena and capitalize on some mental errors by the Huskies defense.

Despite the loss, Morgan said he was proud of his team’s effort and wanted it to be known that his team left everything on the field and gave it everything they got with their run to the semifinals.

“At the beginning of the year starting at a brand new school I had to figure out what the talent level was, and I knew we had some talented guys,” said Morgan. “Our first goal was to make the playoffs and we did that. Next was to keep winning games, and last night when we were in semifinals I told them that this was it. I’m just so proud of what they accomplished this year and I know they’re already ready for soccer season to start again to get back to where we are again and to try and make the finals.”

St. Paul’s will face Randolph in the finals of the AHSAA 4A-5A soccer state championship on Friday, May 8.

The Helena High School boys and girls tennis teams both qualified for the state tournament in Mobile. (Contributed) By GRAHAM... read more