Lady Eagles get past Bob Jones, advance to 7A finals 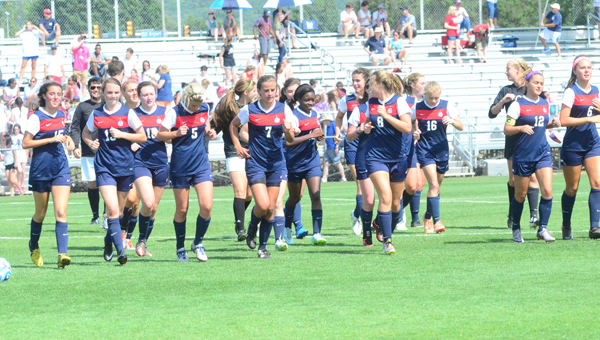 The Oak Mountain Lady Eagles beat Bob Jones on May 8 in the 7A state semifinals by a final of 2-0. They will face Auburn tomorrow morning at 10 a.m. for the 7A state title. (Reporter Photo / Baker Ellis)

HUNTSVILLE – Alexandra Dunn struck first and was followed by Lauren Beard late in the first half to give the Lady Eagles of Oak Mountain a 2-0 halftime lead versus Bob Jones, which they held on to in the second half to win the game by the same score. Dunn knocked the opening goal past the Bob Jones keeper with under 10 minutes to play in the first half to break the 0-0 deadlock, and Beard sent a beautiful ball loping over the keepers head and into the upper left side of the net with under two minutes to play in the half to give the Lady Eagles an insurmountable 2-0 lead.

2-0 might not sound like a score that instills hopelessness in an opponent, but with the Oak Mountain squad, goals are precious commodities. As a team, the Lady Eagles have given up over one goal just once all season, in a 1-2 loss at Hoover on March 11 and have held their opponents scoreless an incredible 21 times this season.

“We have two of the best goalkeepers in the state on one team,” first year head coach David DiPiazza said after the game. “We’re not going to give up goals from 30-40 yards.”

That 30 to 40 yard range is exactly where Oak Mountain forced Bob Jones to fire from repeatedly, and each attempt was seemingly handled with ease.

“We started out kind of nervous,” Dunn said after the game. “But we knew how to put them under pressure and how to finish our chances.”

This Lady Eagles team is no stranger to postseason success, and is the defending 6A state champions. That paints a large target on the backs of the Oak Mountain players, but that experience can only be helpful on the big stage.

“We know how important this is and how hard we have to come out and play,” said Dunn.

The Lady Eagles will face Auburn on May 9 at 10 a.m. for the 7A state title. Oak Mountain has played Auburn once before this season, and beat them 2-0 at home on March 17.

Pelham falls to Fort Payne in 6A semis

William Hilliard tries to fend off Gustavo Contrera of Ft. Payne in the Panthers May 8 6A state semifinal game.... read more