By ABBY COLELLA/For the Reporter

Since 2012, Belk has held its annual Southern Designer Showcase competition, which seeks out Southern fashion designers to compete for a cash prize. The winner’s designs are sold at select Belk stores and online. This year, local fashion designers April Moore and Courtni Tyre, owners of the Shelby County-based clothing company three07, entered the competition for the third time. It seems the third time’s a charm for Moore and Tyre; the duo made it to the finals and walked away as winners.

Moore, a Shelby County native, and Tyre met in their first fashion class at the University of Alabama.

“We graduated with the idea that we wanted to get together at some point down the road and collaborate together,” Moore said. 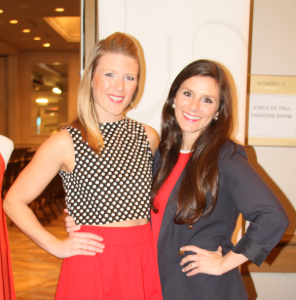 In 2010, they formed three07 and their designs have been sold in over 100 stores across the Southeast.

Moore and Tyre applied for the 2015 Belk Southern Designer Showcase competition at the end of January. They were notified they were one of the 19 finalists at the end of February, and in mid-April, they traveled to Belk’s corporate offices in Charlotte, N.C. to present their designs to a panel of judges.

“Everyone there was so nice and welcoming and I think that helped put us at ease,” Moore said. They received notification that they were one of the five winners on April 23.

Winning the competition and receiving positive feedback from the judges provided Moore and Tyre with assurance that they are headed down the right path.

“We’ve been doing this for five years now, so we needed a big break,” Tyre said.

Moore and Tyre will travel back to Belk’s corporate offices in May for an event to celebrate their achievement and to meet with Belk buyers.

“We’ll know more that day to what extent they will be buying and what we can prepare for,” Tyre said. Their collection will be sold at select Belk stores and online at belk.com in spring 2016.