Parade of nations: School celebrates cultures of the world 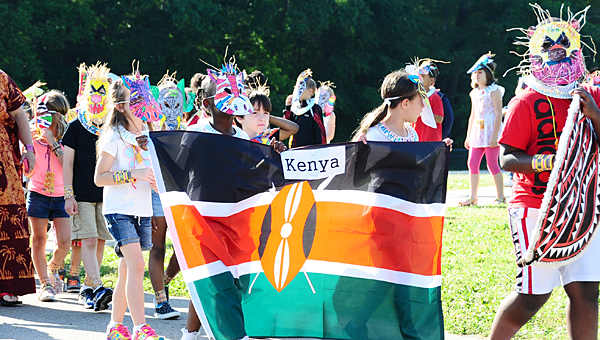 Creek View Elementary School students don traditional Kenyan attire as they participate in the school’s parade of nations on May 8. (Reporter Photo/Neal Wagner)

ALABASTER – Already knowing the career field she wants to enter when she grows up, Creek View Elementary School third-grader Kennedy Shannon had no trouble choosing who she wanted to portray at the school’s cultural day on May 8.

“She wanted to become a biologist, and I want to become a wildlife biologist when I grow up,” Shannon said of the late Kenyan activist and Nobel Peace Prize winner Wangari Maathai.

Shannon and several of her classmates manned “living wax museum” stations scattered around the CVES cafeteria for the majority of the day while portraying a wide range of historic figures. As visitors and students approached each station, the students told about each figure’s life in great detail.

Shannon wore a green traditional Kenyan dress made by her mother, and presented a biographical speech for each group of visitors.

“I read it over a few times, and then it stuck in my head,” Shannon said while displaying her multiple-page speech before the first group of visitors arrived. “I think this is going to be fun.”

The living wax museum was one of the many attractions throughout the campus on May 8, as CVES held its first schoolwide cultural day. To kick off the festivities, every student at the school represented one of 24 countries, donned the traditional dress of each country and participated in a parade of nations around the school grounds.

After the parade, the kids congregated in the cafeteria, where they learned dances and songs from several countries, including a few Native American chants, and heard a bagpipe performance from Dr. Bruce Wheatley.

Following the assembly, the children spent the day traveling around to different stations and classrooms to learn about the many cultures of the world.

“A lot of kids here think this is what the world is like everywhere, but it’s so different from Alabaster,” said CVES Assistant Principal Holly Alverson, noting the teachers and faculty put in an “amazing” effort to prepare for the day.