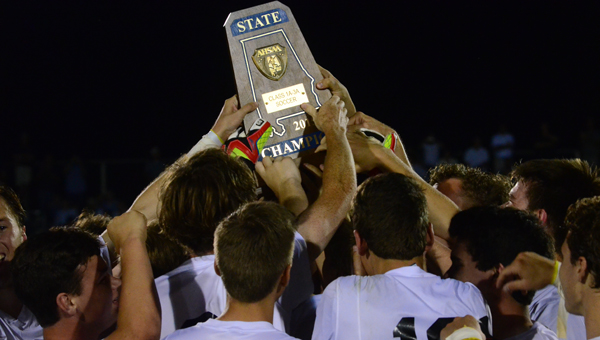 The Westminster School at Oak Mountain Knights lift up their 2015 1A-3A state championship trophy. Westminster defeated Faith Christian School 4-0 in the state finals on May 8 to claim the state title. Westminster finished the season with a 16-1-2 record. (Reporter Photo / Baker Ellis)

HUNTSVILLE – There was never much doubt.

Sure, the first 36 minutes were scoreless, but the Knights from the Westminster School at Oak Mountain were just biding their time. Westminster had blitzed the postseason leading up to the 1A-3A finals against Faith Christian School, winning its prior three games by a combined score of 16-1, including a 3-0 win over defending 1A-4A state champion Indian Springs. The Knights came into the finals with a 15-1-2 record, the only loss coming to 7A power Hoover via a 3-2 loss where the Bucs scored the deciding goal with under three minutes left in the game. They were the best team in the state from start to finish in the 1A-3A class, and showed it in the state finals on May 8.

Faith Christian had an obvious strategy from the jump, pack as many guys as it could into its defensive third to stymie the Knights potent offense and hope for a chance on the counterattack. The Knights were superior both technically and athletically, and knocked on the door throughout the first half, but the Lions defense did not break throughout almost the entire first half.

The one player Faith Christian needed to stop to have a chance was the one player who broke the scoreless stalemate. Senior captain Jack Stein, as he has done so often this year, broke through the Lions defense and knocked a low ball past the outstretched arms of the Faith Christian keeper to give the Knights a 1-0 lead at the half.

Down a goal, Faith Christian was forced to abandon its defensive-heavy strategy and push the pace, which left them vulnerable to the Knights proficient offensive attack. Jared Keeler powered a shot into the back of the Lions net just four minutes in to the second half, and the offensive barrage was on. The rest of the second half served as a combination of target practice and a coronation precursor, as Westminster time and again unloaded on the Faith Christian goal, missing either just wide or just high on numerous occasions, leaving the outcome in little doubt.

With less than 20 minutes left, Stein sent a perfectly placed cross over the leaping heads of a few Faith Christian defenders that found Daniel Richardson, who slammed the cross into the back of the net for a 3-0 lead. Nathan Richards scored the Knights fourth goal off another assist from Stein with less than eight minutes to go to put the exclamation point on the season. Westminster was crowned 1A-3A champions via the 4-0 final.

“When we got that first goal they had to gamble,” Westminster head coach Patrick Fitzgerald said after the game. “We stretched them out and were able to really attack.”

When talking about the seniors on this team, who lost in the state finals two years ago to Collinsville, a Gatorade-soaked Fitzgerald had only the highest praise. “I love them,” he said. “I’m going to miss them. They’re great leaders and they have the hearts of champions.”

Stein, the 1A-3A tournament MVP, understood exactly how special the moment was.

“Very few people get to win their last game,” Stein said. “It’s incredible, very surreal. It hasn’t really sunk in yet. The experience we brought was huge.”

Westminster at Oak Mountain finished the year with a 16-1-2 record and a 1A-3A state championship as well.

Westminster School at Oak Mountain on to finals

By BAKER ELLIS / Sports Editor HUNTSVILLE – The first half was tense and scoreless, but the top-ranked Westminster School... read more