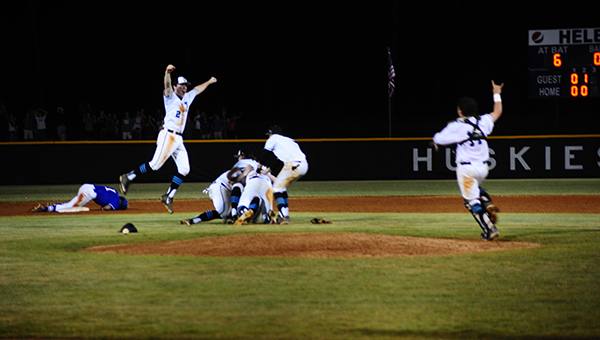 Helena players celebrate after recording the last out to defeat St. Paul’s to advance to the state championship game in Montgomery. (Reporter Photo/Graham Brooks)

HELENA–The odds were not in the Helena Huskies favor. One of the top-ranked teams in the state was coming to town to face a first-year program and on top of that, Helena had to try and replace numerous starters who had been suspended weeks prior for an altercation in a game against Jemison.

Despite all the obstacles, The Helena Huskies baseball team swept the just twice beaten St. Paul’s Saints at home on Friday, May 8 to advance to the AHSAA 5A Baseball State Championship game in Montgomery.

Helena head coach PJ Guy talked about his team’s ability to overcome the adversity and block out the outside distractions and just keep winning.

“It’s hard to explain it,” said Guy. “When you get thrown into that type of adversity with things you don’t expect to happen like that, you don’t know how teenagers are going to respond. As a coaching staff we looked them in the eye and just said believe that this would happen for a reason and just stay the course and just stick together and don’t let anyone from the outside come get in our family because we’re a family, we’re a close knit group.”

On a night where the home crowd was rocking all night long, Helena defeated St. Paul’s by a score of 2-1 in both game one and game two of the Friday night double header to send the Saints packing, and the Huskies will make their first trip ever to the state capital to compete for a championship in just year one of the program’s existence.

Game one and game two might’ve had the same final score, but both games played out very differently.

In game one, Riley Davis pitched 7 innings for the Huskies to hold the Saints to just one run.

Devan Walker came through in the bottom of the sixth inning to push a run across that gave Helena a 2-1 lead that they would not give up to win game one.

In game two, the game did not go by as fast as game one and the Huskies needed extra innings to win the series.

It was the top of the 12th inning and late in the night when the Huskies finally broke through.

Brooks Brophy threw 7 innings of strong baseball and also drove in the winning score in the top of the 12th inning to put the Huskies up 2-1 to propel them to the lead.

Helena’s defense held the Saints in the bottom of the 12th inning and a massive celebration ensued once Helena recorded the last out.

Helena will travel to Montgomery on Thursday, May 14 to take on Russellville in game one of the state championship at 7 p.m.