Finally: Oak Mountain boys break through to win 7A title 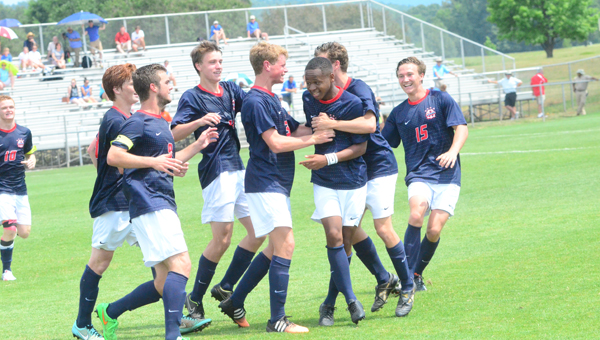 A group of Oak Mountain players swarm Kennedy Davis after his goal with less than 15 minutes to play in the 7A state championship put the Eagles on top of Auburn. Oak Mountain beat Auburn on May 9 by a final of 3-0 to win the first 7A state title. (Reporter Photo / Baker Ellis)

HUNTSVILLE – After the final whistle blew and the trophy presentation had taken place, an AHSAA official turned to Oak Mountain head coach Daniel DeMasters and said, “They’re all yours, Coach DeMasters.”

DeMasters paused, looked around and said out loud, to no one in particular, “Well, I’m not sure what to do now.”

DeMasters, in his second year manning the helm for the Eagles, had just led Oak Mountain to the 7A state championship, an accolade that had only just alluded the Eagles for the last three years. And in the aftermath of that victory, the players and coaches had the excited yet incredulous look of a team that couldn’t quite believe they had just reached the precipice.

A day after knocking off 7A No. 1 Bob Jones 3-0 in the state semifinals, No. 3 Oak Mountain took on unranked Auburn to decide the first 7A state champion. The Eagles could not have had a more difficult run to the championship game, beating No. 2 Vestavia Hills, No. 4 Hoover and No. 1 Bob Jones in the first three rounds of the state tournament to earn a championship game bid.

In the championship game, the Eagles and Auburn played the first 40 minutes to the tune of a scoreless stalemate. Both teams were playing something of a chess match, trying to figure each other out in the early stages, and went into the half tied 0-0.

For the first 20 minutes of the second half, the result was more of the same. Oak Mountain controlled the majority of the possession, and had a number of chances that either glanced off the post or were deflected by the Auburn keeper. Nathan Heim took a particularly nasty shot with his left foot from roughly 30 yards out that seemed to be headed well over the crossbar, but dipped down and glanced just off the top of the post and fell harmlessly out of bounds with 25 minutes left in the game. It was one of the Eagles’ best chances of the game to that point.

Finally, as the clocked ticked less than 15 minutes, the potent Oak Mountain offense woke up. With 14 minutes left in regulation, Hunter Holstad launched a throw in deep inside the Auburn defensive third that was controlled by Kennedy Davis, who calmly plucked a shot into the back of the Auburn net to give Oak Mountain a slim 1-0 lead.

After the first goal, the floodgates opened. Less than five minutes later, Trigg Langner settled a corner kick via Davis and slammed his shot pas the Auburn keeper to double the Eagles lead late in the game. Three minutes after that, Clay McDonald slammed the final nail into Auburn’s coffin when he knocked one in from about 20 yards out to give Oak Mountain the 3-0 lead and subsequently its first state title since 2011.

“I knew we were in shape, and I knew if we just played our game we would tire them out,” DeMasters said after the game. “Finally, they came for us. On set pieces, of all things, but regardless of how they came, we worked for it. And that was the message at half time, just urgency; play like you want to win the game.”

Langner, a West Alabama commit, was named the tournament MVP, and was acutely aware of Oak Mountain’s history entering the game.

“The last two years, losing in the finals, it was the worst feeling ever,” Langner said. “So to come out as a senior in my last year and win in the finals is just the best feeling.”

Helena players celebrate after recording the last out to defeat St. Paul’s to advance to the state championship game in... read more