Thompson advances to 7A state championship 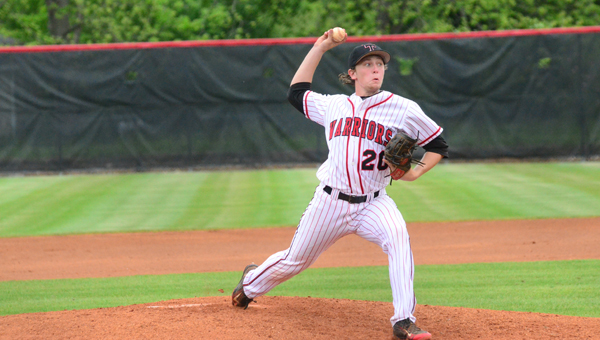 Colin Lillie threw a complete game in the first game of Thompsons’ state semifinal series with Sparkman on May 8. The Warriors beat Sparkman in three games to advance to the 7A state championship. (Reporter Photo / Baker Ellis)

HARVEST – The Warriors are headed to Montgomery.

After three games and 38 total runs, Thompson left Sparkman High School with a 2-1 series win in the state semifinals to set up a state championship showdown with Smiths Station, scheduled for May 15.

To get to the state semifinals, Thompson had to run a veritable gauntlet. The Warriors defeated the two top-ranked teams in the state in Mountain Brook and Vestavia Hills before defeated Sparkman in three games.

In the first game of the series, Warrior ace Colin Lille took the mound and pitched a complete game, seven-inning effort. Lille threw 116 pitches, gave up eight hits and five runs and struck out nine as Thompson won the first game 7-5. The Warriors dropped the second game by the exact same score to set up a game three, winner-take-all matchup on May 9.

In the series finale, Thompson turned to JC Parker. Parker took the mound and never relinquished his post, throwing 97 pitches over seven innings while striking out nine and only allowing three runs on four hits. While Parker was bringing the heat from the mound, the Thompson offense was also doing its part to make sure its season would continue. Four runs in the third, followed by three runs in the fifth and dour more in the sixth removed all doubt, and Thompson won the deciding game 11-3 to advance to the state finals in Montgomery.

Offensive stud Heath Haskins took the first pitch he saw in the bottom of the third over the center field fence, bringing home himself and Riley Reach to give Thompson an early 2-0 lead. In the bottom of the sixth, Stephan Poplin provided the finishing touch. Thompson had been comfortably ahead 7-0 before Sparkman knocked three runs across home plate in the top of the sixth to close to within striking distance at 7-3. Poplin, in the bottom of the inning, took the second pitch he saw out over the center field fence, which scored himself, Lance Johnson and Haskins to extend Thompson’s lead to a comfortable 10-3.

With the win, the Warriors advanced to 31-16 on the season and 6-2 in the postseason. Thompson will take on Smiths Station for the 7A title on May 15, with the first game taking place at 7 p.m.