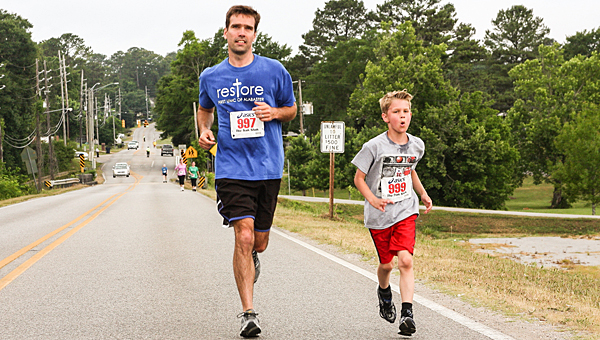 The annual CityFest 5K will return to Alabaster the morning of June 6. (File)

ALABASTER – When Gina McDonald won the At-Home prize in the 2013 season of NBC’s Biggest Loser, she was given more than just money.

At the time, McDonald was relatively unfamiliar with the city of Alabaster, and her only real connection with the city was through her accountant, who is from Alabaster, and was the first person to call her after her At-Home win, because he was concerned about the tax burden the money would cause, McDonald said with a laugh. He is on the board for CityFest, and the idea for the 5K was born.

“When I got back from The Biggest Loser, they asked me to organize it (5K),” McDonald said. “The first year was great, we had a great turnout the first year. Last year our numbers were a little down, and if we don’t get a certain number this year, we won’t be able to continue to have the 5K in the future.”

This year’s run is taking place in a new location, and will be more of a trail run than in years past. It will wind through Buck Creek Trail for the majority of the race, McDonald said, and is a great way to kick off the day’s festivities.

The race will begin at 8 a.m. on June 6, the day of CityFest, while the gates for CityFest itself will open at 9 a.m. The race costs $30 for adults aged 18-70, $20 for high school and middle school students aged 12-17 and $15 for children 11 and under. There will be an early packet pickup available on June 5 from 6:30-8:30 a.m. at Thompson Intermediate School. All packages include a T-shirt and are guaranteed for people who pre-register. You can register for the race at Active.com.

“We want to get the families out there,” McDonald said. “It’s a great way to kick off the day.”

McDonald believes to keep the event going in the future, the 5K will need to have around 150 participants for the Alabaster Arts Council to feel confident enough to continue holding the race.

The gates for CityFest will open at 9 a.m. and Scotty McCreery, the headline act, is set to take the stage at 9 p.m.