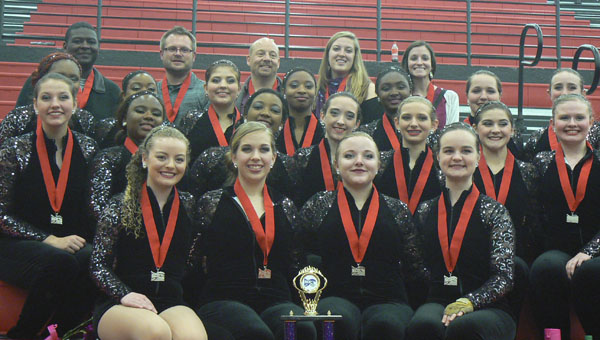 The Chelsea High School Winter Guard placed second at the SCGC championships in Nashville in March, and placed ninth out of 32 teams at a regional competition in Pensacola earlier this year. (Contributed)

CHELSEA – The Chelsea High School Winter Guard has had a busy but successful competition season this year.

The group placed second at the Southeastern Color Guard Circuit championships in Nashville on March 28 with a show called “Wonderland,” an interpretation of a song by Angie Aparo.

“They worked so, so hard,” Color Guard and Winter Guard co-sponsor Melody Reaves said of the CHHS students. “They were practicing at least two or three times a week. They did a wonderful job.”

Reaves said the group competes with the same routine all season long and works to improve its score at each competition.

Reaves said the group is comprised of freshman through senior members.

Reaves and Bonnie Montgomery are co-sponsors.

The CHHS Winter Guard also placed ninth out of 32 teams at a Winter Guard International competition in Pensacola.

“The girls have such a heart for it,” Reaves said. “They definitely did better than Chelsea has ever done in Winter Guard history.”