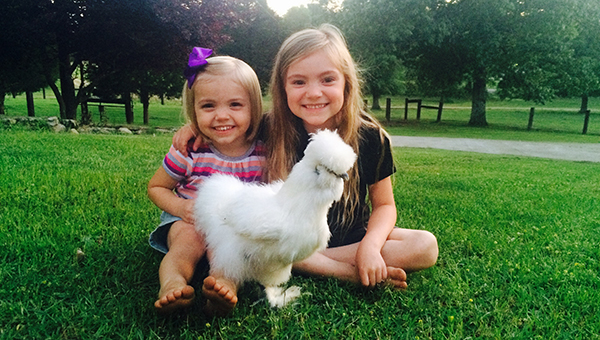 Sisters Lemley and Sawyer Griffin pose for a picture with their one-legged Silky Chicken Lieutenant Danielle who was rescused by their dad, Jamie, and now resides at their home. (Contributed)

HELENA–Jamie Griffin has always had a love for animals, and growing up on a farm Griffin always came in contact with a variety of animals.

Griffin is now the manager at Mid-State Farmer’s Cooperative in Columbiana where he continues to come across and take care of a variety of animals. Within the past few months a special pet has come into the lives of his family.

In February, Griffin had 15-20 silky chickens he was looking after and overnight a predator attacked one of the chickens in the coop and Griffin described the scene the next morning.

“The next morning I got up and I thought one of the chickens was dead,” said Griffin. “I could tell something pulled her through the pin. She had a right leg missing and a hole going into her chest. I brought her into the house and kept treating her and she kept living. I had to change her bandages and make sure she was eating, but eventually I brought her to work everyday.”

Griffin and his wife Amy have two daughters, 5-year-old Sawyer and 3-year-old Lemley and Griffin jokingly admits he will use his daughters as an excuse to get more animals.

“I didn’t want my daughters to be upset about the chicken being hurt so I was doing everything I could to save her,” said Griffin. “We tried a few different prosthetic legs with 3D printers and we have one that works well but she has gotten to the point where she is fine without it.”

The 2-year-old silky chicken, now affectionately known as Lieutenant Danielle, has made a full recovery and has become somewhat of a local celebrity around the Helena and Columbiana communities.

“About three weeks after the attack I knew she would make it and be fine,” said Griffin. “She’s kind of our mascot at the co-op and she rides in a little basket in the passenger seat of my truck everyday to and from work. She knows my voice and wants to be near me and around my daughters and wife. She is just a good buddy.”

Griffin and his family live in Helena where Lieutenant Danielle has become a part of their family along with all the other farm animals they have.

Griffin built a homemade chicken coop out of an antique dresser at his family’s home and that is where Lieutenant Danielle now resides.

Griffin said the chicken has a great personality and will let anyone come up and pet her.

“She’s very calm and won’t run from you,” said Griffin. “The only time she makes noise is if I talk to her or if dogs start barking or someone pulls up.”

A Facebook fan page was created for Lieutenant Danielle complete with pictures and more that can be viewed at Facebook.com/pages/Lieutenant-Danielle/1583187888604789.