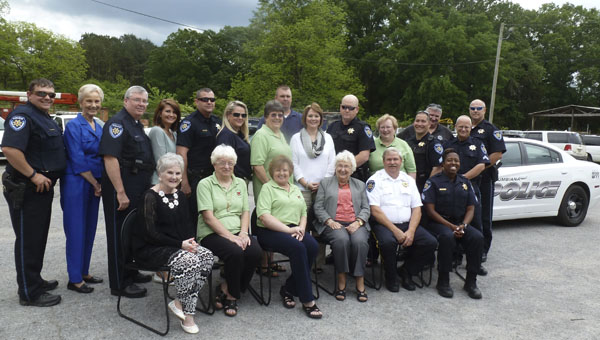 “I just thought it would be a good idea to show support to our police,” said Novella Vice President Becky Moore, who came up with the idea.

The entire Novella Club gathered door prizes as well as goodie bags filled with items for each officer. Columbiana merchants were extremely generous.

“We did not have one merchant turn us down,” said Moore.

Scott Owens of Sign Graphics created the sign on the corner of Old Mill Square that reads, “We appreciate and support our Columbiana Police Department, Novella Club of Columbiana. Thank you!”

The entire force was in attendance due to a mandatory training session that day.

He recently graduated from the Jefferson County Sheriff’s Academy and joined the Columbiana Police Department.

A delicious lunch was served among the warm fellowship of the Novella Club women and police.

Chief Lamar Vick was presented with a beautiful vase of flowers designed by Leesa Nivens of Gail’s Florist for his wife Beverly.

“I know we have no way of showing our true appreciation for each of you,” said Moore to the police at lunch. “The world is getting to be a bad place and we want you to know we appreciate you.”

Veteran of the Week: Duncan is a vet helping vets