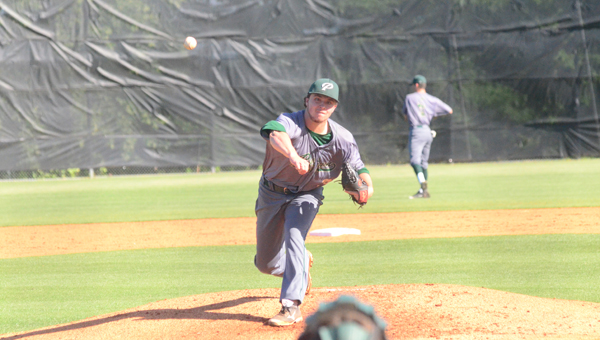 Sam Finnerty helped lead the Pelham Panthers past Spanish Fort on May 8-9 to earn a spot back in the 6A state championship series. Pelham will face Cullman for the 6A state title on May 15. (File)

PELHAM – Prior to their state semifinal showdown series with Spanish Fort, the Pelham baseball Panthers hadn’t just waltzed through the 6A playoff field, they had doused the field in gasoline and torched the whole thing. Through the opening three weekends, Pelham was 6-0, had only given up six runs total, five of those coming in the same game, and had won every game by an average of six runs.

Pitching wins games at the high school level more than anything, and in the postseason when teams are only playing two, maybe three games a week, a few superior arms can carry any team far. With the Panthers pitching rotation chock-full of future college, potentially professional athletes, Pelham has turned time and again to Sam Finnerty, Connor Radcliff and Tyler Wilburn to lead them to the 6A finals.

In the semifinals, Pelham faced Spanish Fort for a berth in the 6A finals. After Finnerty did what Finnerty does best, win games, Pelham was up 1-0 in the series. The Toros did not go away without a fight, and hung three runs on Radcliff in six innings before winning the game in the bottom of the seventh against Alex Weeks to give Pelham its first loss of the tournament, setting up a do-or-die game three.

The Panthers turned to Tyler Wilburn to keep the season alive. Wilburn, who had not taken the mound since April 11, delivered in spades. He went a complete seven innings in game three, threw 107 pitches, gave up only three hits and struck out eight and did not allow a single run.

Even with Wilburn controlling the game from the mound, Pelham was unable to muster any offense through the first five innings of the game. In the bottom of the sixth inning, with the game still tied at 0-0 Hunter Alday was able to score from first base when Sam Finnerty hit a hard ground ball that allowed Alday to get all the way around the bases. With the slim 1-0 lead, Wilburn struck out the first batter of the seventh inning before getting two of the next three batters to ground out, ending the game and advancing the Panthers to the 6A championship.

Pelham will take on 6A No. 1 Cullman on May 15 in Montgomery.