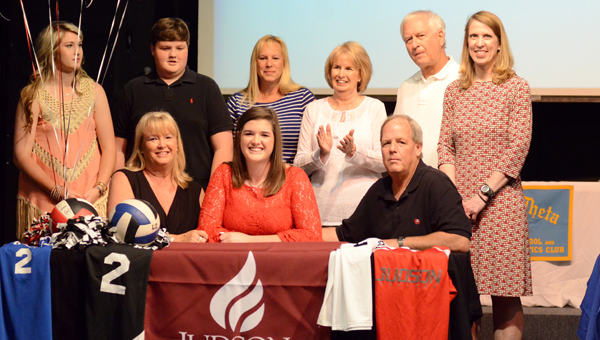 ALABASTER – On May 11 Katie Allen Etheridge and Dillon Calhoun, both seniors at Kingwood Christian School, signed athletic scholarships to continue their respective athletic careers. Etheridge, a middle hitter on the Kingwood volleyball team, will take her talents to Judson College while Calhoun, a combination pitcher/outfielder for the baseball team, will fill an outfield-specific role at Marion Military Institute. 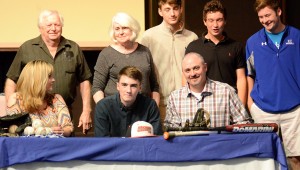 The two have taken slightly different journeys to get to this point. Etheridge has been committed to Judson since October, while Calhoun did not decide to attend Marion Military Institute until roughly a month ago, he said.

Etheridge knew she wanted to play volleyball in college since around the time she was in the 10th grade, she said. And, after her coach approached Judson and Judson showed interest, Etheridge did not take long to buy into the college. She rattled off reasons why she felt like Judson was a good fit.

Calhoun was approached by MMI last summer, after Calhoun played in a showcase and impressed the Tigers’ coaching staff. Since that time, Calhoun and MMI have been in contact, culminating with the signing on May 11.

Calhoun came to Kingwood for his junior and senior years, and helped lead the Lions to a 22-12-2 record this season and a second-round berth in the AAA AISA playoffs. He has the opportunity to come and immediately contribute for MMI.

“He (MMI’s coach) said I have a really good chance of playing,” Calhoun said. “And they play a lot of doubleheaders, so even if I don’t start I’ll definitely get a lot of playing time.”

Judson and Marion Military Institute are both located in Marion, and are located less than a mile apart from each other, and are both roughly an hour from Alabaster.

Both Calhoun and Etheridge will graduate from Kingwood on May 21, and will hope to contribute to their respective rosters in the fall.