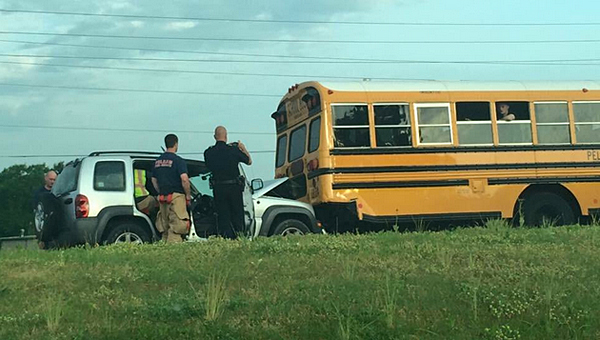 Pelham police and firefighters work to clear a wreck involving a Pelham school bus on the morning of May 12. (Contributed/@williswatkins)

PELHAM – One adult was transported to the hospital with minor injuries, but no children suffered significant injuries after an SUV rear-ended a Pelham City Schools bus on the morning of May 12.

The wreck happened at about 6:50 a.m. when a silver Jeep SUV rear-ended the school bus in front of the Pelham Home Depot store on the northbound side of U.S. 31, said Pelham Deputy Fire Chief Blair Sides.

A passenger in the SUV was transported to the hospital with minor injuries, Sides said.

The school bus was transporting a full load of middle school students at the time of the collision, and two students suffered “very minor injuries” and were taken home by their parents as a precaution, Sides said.

The Pelham police and fire departments were forced to close a portion of the road for about an hour as they cleared the scene. As of 7:45 a.m., the wreck had been cleared, and all travel lanes had reopened to traffic.

Alabaster resident Noah Galloway, left, proposed to his girlfriend, Jamie Boyd, on-air during “Dancing with the Stars” on May 11.... read more