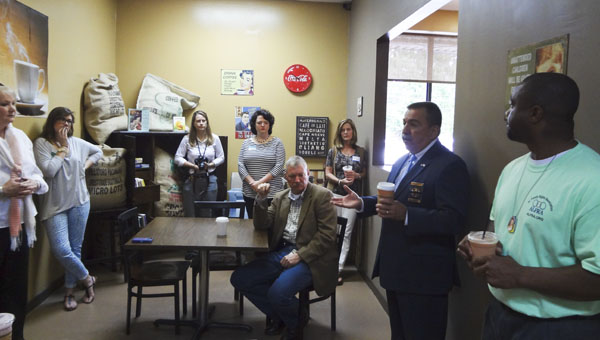 Samaniego and Palmer talked to citizens over coffee at Kai’s Koffee House in Pelham on May 12 about current issues facing law enforcement officers and citizens, initiatives available to the public and upcoming events their departments help with in the county.

They also invited questions and comments from those present.

“We’re really working hard to be part of the community,” Samaniego said. “We really want that feedback.”

Samaniego talked about the Shelby County Sheriff’s Office’s community outreach efforts, including the Project Lifesaver initiative to help at-risk children; school visits and programs; a stronger presence on social media; greater accessibility to public information and news releases on the office’s website; and an increased presence at civic club meetings, festivals and other local events.

“It’s working out very well, and we hope to continue that,” Samaniego said.

Samaniego noted this week is National Police Week and urged people to reflect on officers’ lives lost in the line of duty.

“We’re still trying to find ways of keeping officers from being killed,” Waters said. “The whole mindset of our culture has changed regarding law enforcement officers. My heart goes out to them. I really don’t know what the answer is.”

Palmer said training is key to preparing officers to properly handle situations and prevent harm to citizens and themselves.

“Our main focus at Pelham is safety and training,” Palmer said. “We want to be approachable, but it’s a guarded approach.
“We’re human beings, too, guys. We’re so easily critical of police officers, and we’re trying to do the best we can. Sometimes, it’s a daunting task.”

Palmer and Samaniego urged citizens to take steps to protect themselves from falling victim to crimes and to report suspicious activity they witness to local law enforcement agencies.

“Law enforcement is everybody’s job,” Palmer said. “We would rather prevent it than investigate it.”

New software will have ‘dramatic effect’ for fire department

The Alabaster Fire Department will be able to more efficiently respond to calls thanks to a new software system, according... read more