COLUMBIANA–A 26-year-old Helena man arrested on a capital murder and robbery charge on April 28 was indicted on the charges on May 6, according to court documents. 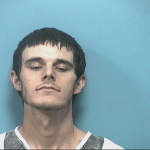 Justin Taylor Ward, 26, was arrested on April 28, and charged with capital murder and robbery of Gene Ward Jr.

Gene Ward’s body was discovered in his home in the 2500 block of Shelby County 93 in rural Shelby near Helena on Monday, April 27 he died from apparent gunshot wounds, according to police.

According to Ward’s indictment, “on or about” April 26, Ward allegedly “intentionally caused the death of Gene Ward Jr., by shooting him with a pistol, and the said Justin Ward caused said death during the time he was in the course of committing a theft of property, to-wit: One brown leather wallet with assorted contents and/or U.S. currency, one check and one 1994 Mercedes vehicle.”

Justin Ward is currently in the Shelby County Jail where he is being held without bond.

On April 30, Justin Ward was arrested for destruction of property by prisoner, a Class C felony, according to court documents.

Justin Ward is scheduled to appear in court for an arraignment on June 15 at 1:30 p.m.

“It is always difficult to lose a loved one and my sincere wish for Mr. Ward’s family is that they somehow find peace as they go through this most difficult time,” Shelby County Sheriff John Samaniego wrote in a previous statement.