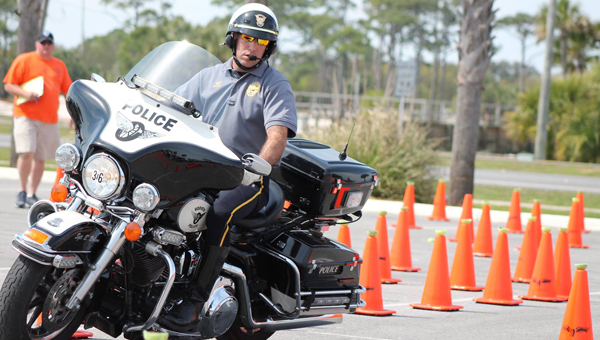 HOOVER—Harley-Davidson motorcycles are not just the bikes of choice for avid riders, they’re also the go-to bikes for the Hoover Police Department’s motorcycle unit. The highly-trained group of seven officers, headed up by Hoover Police Sgt. Brian Nelson, patrol the streets and man events, keeping the city safe.

Officers in the motorcycle unit usually work traffic enforcement beats, are called in for accident investigation and provide security at the city’s special events. Motorcycles provide many advantages in these lines of police work over traditional patrol cars and SUVs.

Unlike traditional police cars, the smaller-sized motorcycles can more easily maneuver through traffic, especially when responding to an accident, Nelson explained. Additionally, the open-air nature of motorcycles allows officers to be more attuned to the surroundings.

“It increases our ability to see and detect,” Nelson said. “You can hear more things going on around you.”

Patrolling on a motorcycle takes far more training than the basic ability to ride a motorcycle. Officers must complete an 80-hour, two-week-long training program covering all aspects of policing on a bike, including riding techniques, traffic stop procedures and how to use the bike as protection or cover.

Nelson is a certified police motorcycle instructor and leads training classes for Hoover officers as well as those from as far as Cullman and Talladega.

“Their riding ability is worlds above the average motorcycle rider after that class,” Nelson said. “We have a very strong training program.”

Following the two-weeks of intensive training, officers spend two weeks patrolling with an experienced member of the motorcycle unit before they are ready to work on their own.

Although policing on a motorcycle can be dangerous and officers are exposed to the elements, it’s all part of the job to keep the streets safer.

“Most of the guys are pretty tough and are acclimated to the extreme hot and the extreme cold,” Nelson said. “There are way more advantages than challenges riding a motorcycle.”

Helena’s annual Clean-up and Clean Out Day will be Saturday, May 30 from 8 a.m. to noon. (File) HELENA–Residents of... read more