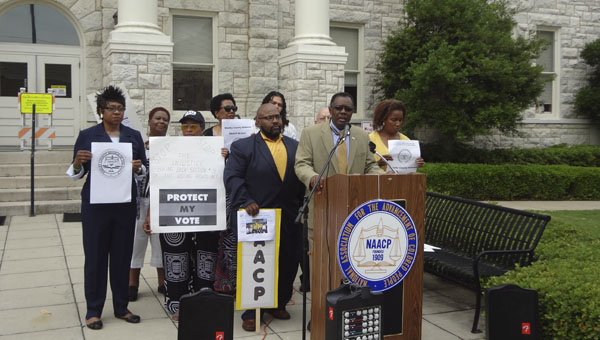 Members of Shelby County and area NAACP chapters held a press conference in front of the Shelby County Courthouse on May 12 to announce dates and details for voting rights events in Shelby County in June. (Reporter Photo / Emily Sparacino)

COLUMBIANA – Those in favor of reinstating equal voting privileges for all citizens in Shelby County, Alabama and the rest of the country will have an opportunity this summer to come together and show their support in a three-day series of events.

Members of area NAACP chapters held a press conference May 12 in front of the Shelby County Courthouse to announce the Restore the Vote, Summit, March and Rally set for June 19-21 in Shelby County.

“We want Congress to restore the voting rights back to where it was in 1965,” Alabama State Conference of the NAACP President Benard Simelton said. “We still believe there are discriminatory practices going on throughout the country.”

Two years ago, the United States Supreme Court’s Shelby County v. Holder ruling struck down the preclearance provision of the Voting Rights Act of 1965 that required Shelby County and cities and counties in 16 states with histories of racial discrimination to obtain federal approval from the Department of Justice before changing voting procedures or electoral maps.

“We stand here basically to say the nation is ready to respond to that ruling,” Rev. Kenneth Dukes, president of the Shelby County NAACP chapter, said. “We want to empower the people with knowledge and understanding of what they lost … and what they need to do.”

Dukes said his and others’ efforts to organize this summer’s events – and their renewed fight for preclearance and equal voting rights – are fueled by an incident in Calera related to voting districts.

The new voting districts eliminated the only black majority voting district, and Calera City Councilman Ernest Montgomery, a black man, lost his seat by a handful of votes.

The federal government refused to certify the results, and Montgomery won a seat on the council after the city held another election.