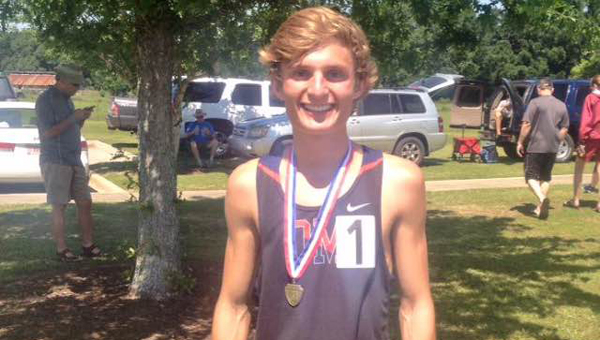 When the dust settled, and the medals had been distributed and everyone was going home from the state track meet in Gulf Shores on May 2, Cole Stidfole walked away with two large medals hanging from his slender neck. Stidfole, a sophomore at Oak Mountain, is a slender kid with shaggy hair who can flat out run. He was a frequent visitor to the winners’ circle in both the 1,600-meter and the 3,200-meter run in the 2015 season, only losing the 3,200-meter race once all season, and came in to the state meet at Gulf Shores seeded first in the 3,200-meter run and tied for first in the 1,600-meter run.

That’s a lot of numbers that all add up to one undeniable fact, Stidfole has some serious speed in those young legs of his.

A runner since the seventh grade, Stidfole knew he had a chance to be special, “After about halfway through that seventh grade year.” He was easily keeping up with kids older than he was, and had a natural talent at running long distances quickly. Ever since that seventh grade season at the middle school level, Stidfole has buckled down on his training and has now become one of the best young runners in the state.

A quiet kid, Stidfole talks about his accomplishments in a matter-of-fact tone, without a hint of a boast in his voice. His eyes light up most, not when he is talking about running, but when talking about the duck blind he and his father visit in Mississippi virtually every weekend during duck season.

Moving forward into his upperclassmen seasons, Stidfole wants to work on developing more finishing speed and would like his 3,200-meter personal best to be hovering around nine minutes and his 1,600-meter time around four minutes.

With his current pace, those seem to be attainable goals.