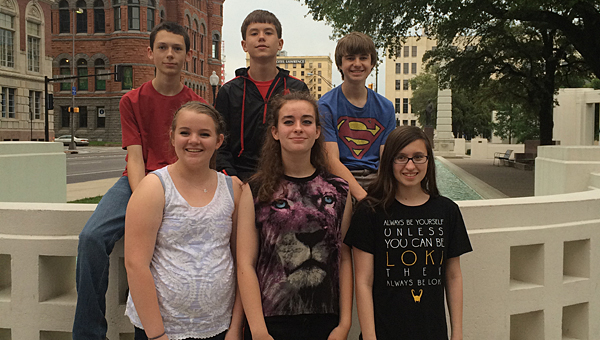 DALLAS – On the weekend of May 9, Thompson Middle School joined 127 of the top middle school scholars bowl teams at the Hyatt Regency DFW for the 2015 Middle School National Championship Tournament to determine who was the best.

The matches feature a blend of individual competition and team collaboration, since no individual player is likely to be an expert in all subject areas. Participation in quiz bowl both reinforces lessons from the classroom and encourages players to develop new intellectual interests.

Thompson Middle entered as one of the six Alabama teams competing at the national championship after winning its pool at the Russellville Invitation in January. This is the third-straight year TMS has qualified for the national tournament.

Top TMS scorers in the tournament were Isabelle Yarbrough (174) and Simon Schuessler (217) in a field of almost 700 students.

The team works from September to March and consists of both a seventh- and eighth-grade team, but a blended team traveled to nationals. While in Dallas, the students, parents and sponsors visited the Perot Museum of Natural History and Sixth Floor Museum.

Hoover School Board bids farewell to board president

School Board member Derrick Murphy presents School Board President Donna Frazier with a portrait as thanks for her years of... read more