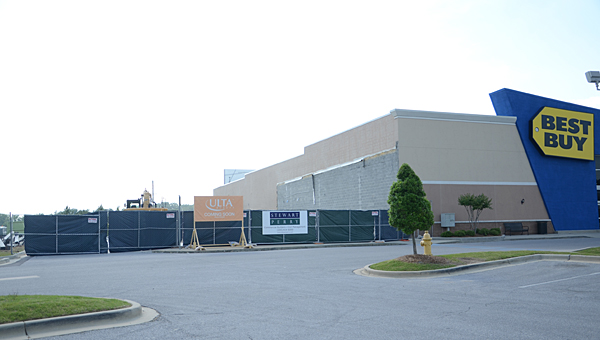 ALABASTER – The former maurices building between Dick’s Sporting Goods and Best Buy in Alabaster’s South Promenade shopping center has been torn down, as crews are preparing to begin work on a new Ulta Beauty store.

Demolition crews finished tearing down the former maurices clothing store on May 8 to make way for the new, larger Ulta Beauty store. The new building likely will be completed by September, and the Ulta Beauty store will open in late 2015.

Ulta Beauty, which currently has stores in Hoover’s Patton Creek shopping center, off U.S. 280 in Brook Highland and in Tuscaloosa, is a high-end beauty supplies store, which includes a full-service salon in each of its locations.

The Highway 31/11 LLC development company, which owns the Dicks Sporting Goods property, also owns the former maurices property. Once the new building is constructed, it will be “about two-and-a-half times” the size of the maurices building, making it a 70-foot-wide by 145-foot-deep building, Alabaster City Manager George Henry said previously.

During a February meeting, the Alabaster City Council voted unanimously to approve an incentives package valued at up to $516,000 over the next five years. The vote came after a public hearing on the matter, during which no residents spoke for or against the incentives.

Henry previously said the city will begin collecting 100 percent of the store’s sales taxes after the store has been open for five years. If Ulta or a similar-sized business does not occupy the building for at least 10 years, Highway 31/11 LLC will be required to repay all sales tax rebates.

Members of Shelby County and area NAACP chapters held a press conference in front of the Shelby County Courthouse on... read more