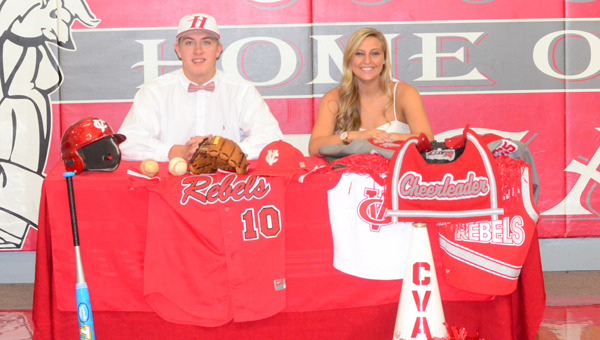 Walker Holmes, left, and Payton Stephens both signed with Huntingdon College on May 12. Holmes will play baseball for Huntingdon while Stephens will join the cheerleading squad. (Reporter Photo / Baker Ellis)

HARPERSVILLE – On May 12, two Coosa Valley seniors made their college decision official. Payton Stephens and Walker Holmes will both attend Huntingdon College, where Stephens will cheer and Holmes will play baseball. Stephens made her decision months ago to attend Huntingdon, while Holmes wasn’t even sure what sport he wanted to play in college, and made his decision much later in the year.

Stephens, on the other hand, committed to Huntingdon back in the fall.

“I decided back in October or November,” Stephens said. “But we just recently had cheerleading tryouts, which determined it all. I’ve known for a long time (I was going there).”

After Holmes made his decision to pursue baseball instead of football, the coaches made sure he signed with the Hawks. “(I decided) probably about three weeks ago,” Holmes said. “I went down there for a visit and talked to the coaches and everything. They pretty much locked me up, they did a really good job.”

Both Holmes and Stephens cited some of the same reasons for choosing Huntingdon, chief among them were the similar feel the school has to what they have experienced at Coosa Valley.

“It’s kind of like here,” Stephens said. “You know everybody and everybody knows you. It feels like home.”

Huntingdon College is located in Montgomery, which is less than two hours away from Harpersville, which according to both Stephens and Holmes is a nice distance.

Holmes will play third base for the Hawks, and hopes to see some playing time right away at the hot corner.

“It’s just going to take me going out there and proving myself,” Holmes said. “But I feel like if I go out there and do what I can do I can get on the field.”

Both Stephens and Holmes will report to Huntingdon at the beginning of August.

Katie Allen Etheridge signed with Judson College on May 11 to continue her volleyball career. (Contributed / Dianne Cunningham) By... read more