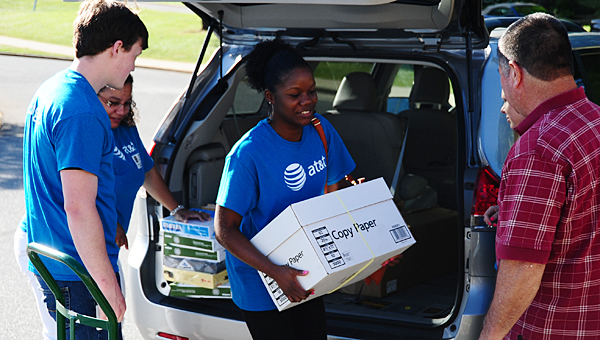 AT&T volunteer Sharanda Miller unloads a box of donated school supplies as she and several of her colleagues deliver the items to Meadow View Elementary School on May 13. (Reporter Photo/Neal Wagner)

ALABASTER – Teachers at Alabaster’s Meadow View Elementary School will have fewer out-of-pocket expenses this summer after an AT&T employee outreach group surprised the school with a load of donated school supplies on May 13.

During the school’s morning newscast, four members of the HACEMOS Alabama Chapter joined MVES students and administrators in announcing they were dropping off several boxes full of supplies donated by employees at the Hoover AT&T office.

With the help of the 50>Forward Professional and the Community Network groups, HACEMOS organized a weeklong teacher appreciation supply drive at the Hoover office to collect supplies for MVES teachers.

When the drive ended on May 8, the groups had collected everything from three-ring binders and Keurig K-Cups to paper towels and Post-It notes, and were still receiving donations several days after the drive ended.

“When I asked (ESL teacher) Mrs. (Susan) Clarke what the school needed, she was telling me all of this stuff for the students,” HACEMOS Alabama Chapter President Marilyn Barnett said. “I said ‘This is for the teachers.’ That’s what I love about the teachers here. They are always thinking about the students.”

Clarke a supply drive at the end of the school year is especially appreciated because teachers often have to spend significant amounts of their own money on supplies during the summer to prepare for the upcoming school year.

“Everything here is something someone needs,” Clarke said as she pored over the numerous boxes of supplies stacked in the school’s physical education lab. “I’m so excited. It’s like Christmas for us.”

After the AT&T volunteers unloaded the supplies and placed them in the PE lab, Clarke and GRC teacher Lindsey Thigpen spread the items out on a table in preparation for teachers to choose what they needed throughout the day.

During the morning’s newscast, Barnett, who has a student at MVES and has had three others go through the school previously, called teachers her “heroes.”

“They’ve taught me so much as a child and as a parent,” Barnett said. “I can’t imagine what the world would be like without them.”