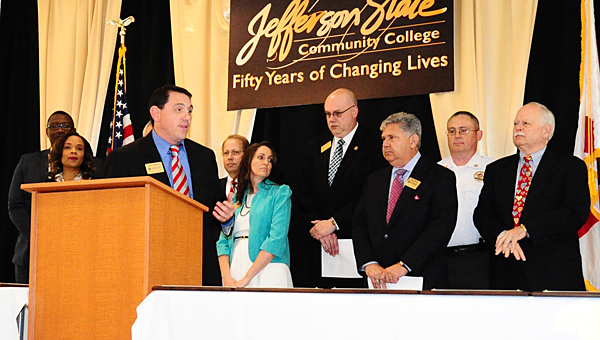 HOOVER – The upcoming Alabama Fire Museum in Calera, Columbiana’s Shelby County Historical Society and several nonprofit organizations will benefit from a trio of projects completed over the past several months by the 2015 class of Leadership Shelby County.

Since August 2014, the 33-member LSC class of 2015 has been meeting one day each month to learn more about different aspects of Shelby County, including its history, criminal justice system, business and industry and more.

At the beginning of the program, the participants split into three groups to complete projects aimed at benefiting the community.

During the May 13 graduation ceremony at the Jefferson State Community College Hoover-Shelby Campus off Valleydale Road, the 33 graduates shared the impact their projects have had.

“We are all past, present and future leaders with the potential for greatness,” 2015 class representative Herbert Orise said of his experiences. “We are all ready for greater challenges and greater leadership opportunities. We must continue to spread our wings and our aims must be ever-higher.”

Through the project, the group designed a new logo for Roundtable, created an updated email database, created a Facebook group and fostered a large Roundtable meeting in early May.

The second project group focused on supporting the Alabama Firefighter Museum and Education Center, which will one day be built off exit 228 in Calera.

As a result of the project, the group was able to organize a capital campaign kickoff gala for October, produce and distribute printed materials promoting the museum to fire departments throughout Alabama and present their plans to the Shelby County fire chief’s meeting.

The third project group created the first “Shelby Sentinels” group, which is open to local high school juniors and serves as the official ambassador group for the Shelby County Historical Society.

After high school juniors applied for and were chosen for the Shelby Sentinels, they provided help at several Historical Society events and created interactive presentations aimed at preserving the county’s history. In early May, the Leadership group awarded a $1,000 scholarship and a $250 scholarship to the students with the best presentations.

Daniel Nixon, a junior from Spain Park, won the 800-meter run at the 7A state track and field championships with... read more