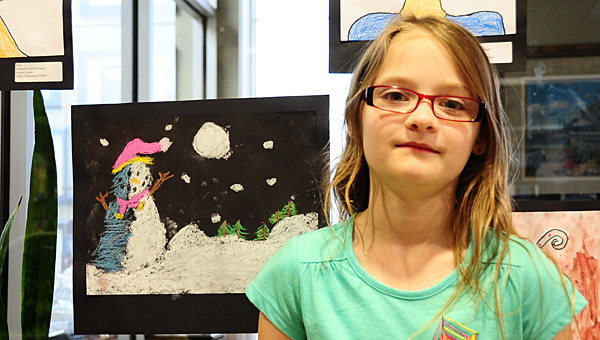 PELHAM – Valley Elementary School second-grader Sara Rowe has completed so many works of art this school year, she had trouble remembering exactly when she completed the two pieces on display at Pelham’s IberiaBank on May 12.

“I don’t remember, exactly,” Rowe said with a smile as she looked at the two pieces of art – One a snow scene drawn onto a piece of black construction paper and the other a black city skyline set behind a colorful body of water.

The relatively short amount of time Rowe spent on each piece – two days – was not evident in the high levels of polish and professionalism in each of the soft-spoken second-grader’s pieces of art.

The Pelham IberiaBank on U.S. 31 opened its doors after-hours on May 12 to host a reception for the VES and Thompson Middle School students whose artwork was on display throughout the bank.

Through May 19, the walls of the bank will be covered with dozens of pieces of art from TMS art teacher Claire Caldwell’s and VES art teacher Amanda Knight’s classes.

“This is just a collection of artwork the students have done all year,” said Pelham IberiaBank Branch Manager Debbie Parrott. “It just gives the kids a chance to show off their artwork to their families and the community. They’ve worked so hard all year long, and we want to recognize it.” 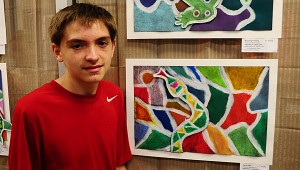 One of the pieces on display was TMS seventh-grader Gavin Hall’s 3D painting. The piece was painted to resemble a colorful stained-glass window with a snake slightly elevated from the canvas.

“I painted the white lines first and then colored them in,” Hall said as he showed the artwork to his parents, Billy and Kirstin. “Then I took black squares and glued (the snake) on there to make it 3D.”

AT&T volunteer Sharanda Miller unloads a box of donated school supplies as she and several of her colleagues deliver the... read more