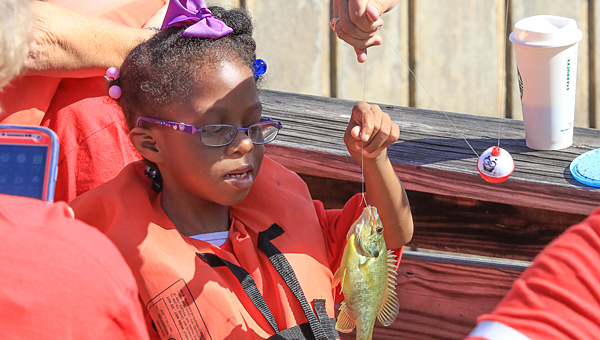 A student admires the fish she caught during the annual “Gone Fishin’ not just Wishin’ event at Oak Mountain State Park. (Special to the Reporter/Dawn Morrison)

PELHAM – Approximately 350 special needs kids from Shelby County Schools, Alabaster City Schools and Pelham City Schools headed to Oak Mountain State Park on May 13 for the annual “Gone Fishin’, Not Just Wishin'” event. The event, which is in its 21st year, took place from May 13-15, and serves students from both Jefferson and Shelby counties.

“We had the most amazing time, it was the perfect day for us,” said Virginia Aycox, who works in the central office for Alabaster City Schools. “It’s about getting to be outside and letting them be kids in a natural environment.”

Each special needs student is paired with a volunteer who helps the student catch a fish from the .9-acre lake, which is well-stocked with about 1,000 fish, according to Jerry Moss, who coordinates the event for the Alabama Division of Wildlife and Freshwater Fisheries.

“The day went as well as it could go. This is one of my favorite events. It’s just so fun,” Moss said, noting that every student was able to catch at least one fish, and many students caught multiple fish.

Most fish the students catch are thrown back into the lake, but any fish hurt in the process are cleaned and fried, so students can taste what they caught.

Fishing is not the only fun activity of the day: There is live music, face painting, inflatables, a picnic lunch as well as visits from mascots such as Big AL, Aubbie, and Warrior the dog. In addition, storytellers entertain students during “Fish Tales” and students have a chance to create a piece of artwork.

Matt Bowden, vice president of environmental affairs for Alabama Power and a volunteer at the event, said the program is a chance for kids to gain a new experience.

“It’s just a great opportunity to support the community and give these kids an opportunity to do something they might not get to do otherwise,” Bowden said.

For volunteer Jennifer Rasberry, the best part of the event is seeing the joy on students’ faces.

“It’s about getting to see children having an experience they might not get to do everyday,” Rasberry said.

Union, The Church at Chelsea Park will hold its 10th annual Car Show and BBQ event May 23 from 10... read more