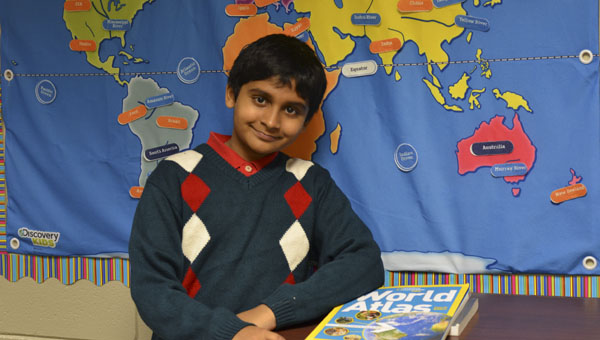 Kapil Nathan, a 10-year-old fifth grader at Mt Laurel Elementary School, finished in the top 10 at the National Geographic Bee on May 13. (File)

Ten-year-old Kapil Nathan, a fifth grader at Mt Laurel Elementary School, was among 54 state-level winners who participated in the Bee’s preliminary rounds on May 11. As a top-10 finisher, Nathan competed in the final round May 13 at National Geographic headquarters in Washington, D.C.

Menon correctly answered the following question to win: “If completed, the proposed Grand Inga Dam would become the world’s largest hydropower plant. This dam would be built near Inga Falls on which African river?” The answer was “Congo River.”

Award-winning journalist Soledad O’Brien moderated the final round of the Bee, which included more than 4 million students in more than 11,000 schools in all 50 states, the District of Columbia, U.S. Atlantic and Pacific territories and Department of Defense Dependents Schools.

This year marked Nathan’s second time to compete at the state level. He won the 2015 State Geography Bee at Samford University in March after winning his school’s first Geography Bee in February.

Nathan is the son of Archana Subramanian and Vaidyanathan Sahasranaman Venganullur and has a younger brother, Krish.